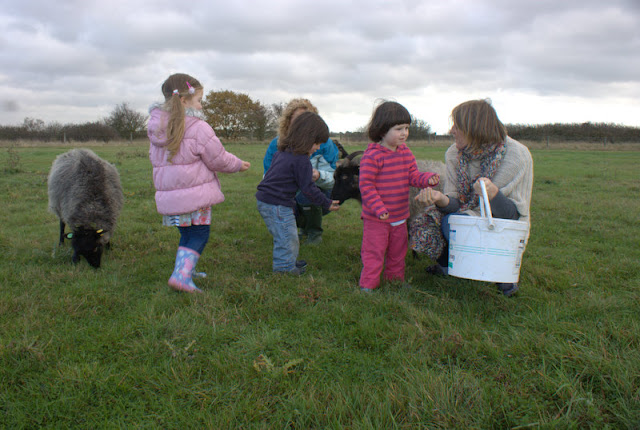 We had an amazing time at nature nursery today. About ten minutes after we arrived the farmer came to tell us that a cow had just given birth. He took us to the edge of the field where the mum and calf were and we were able to watch its first stumbling footsteps in this world. 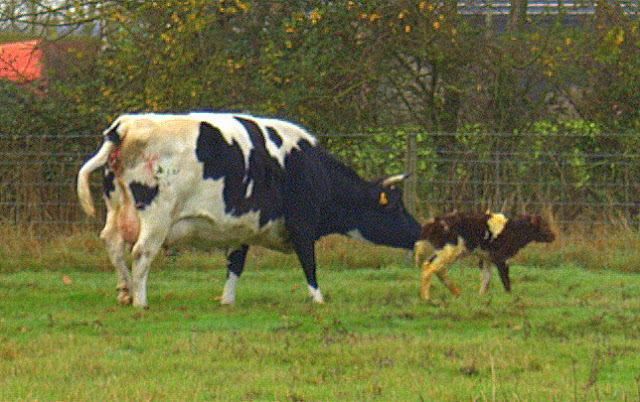 Although the kids enjoyed looking at the cows they are a bit young to appreciate what an amazing experience it is seeing such a new life. They were actually more excited by the straw they could throw around and running about shouting "moo". 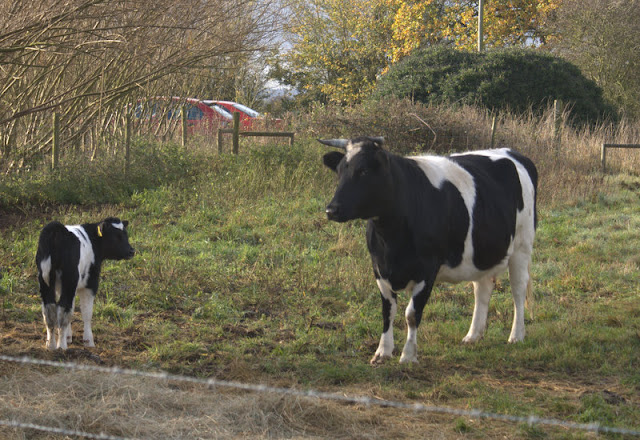 The herd are Shetlands and they have beautifully soft coats. In the same field as the newborn calf there was a two week old with her mum. Rudy the calf has the most amazing fluffy coat. 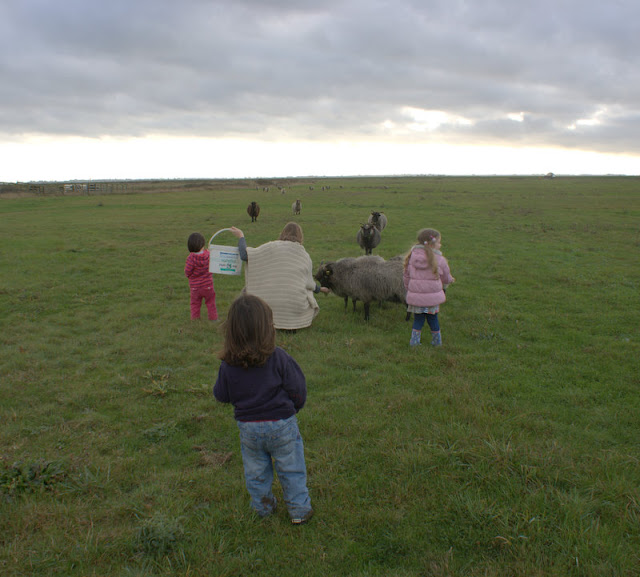 As well as seeing the cows we got to feed the sheep - one of mine and Goblin's favourite activities. 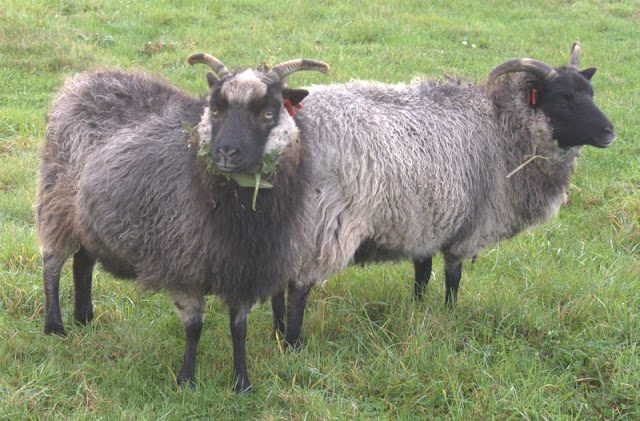 Look at this beautiful sheep. It had been rubbing up against plants and had greenery around its nek that made it look like 'the green man'. 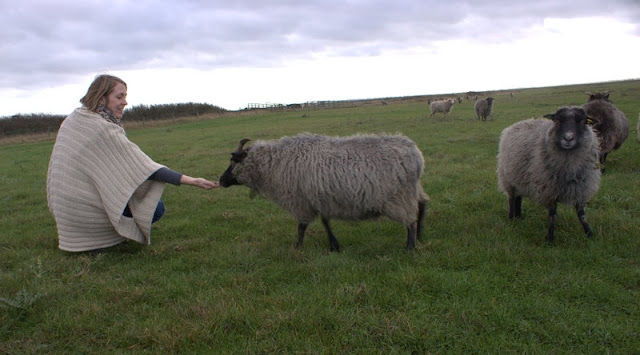 I'm not the only mum who loves this activity. 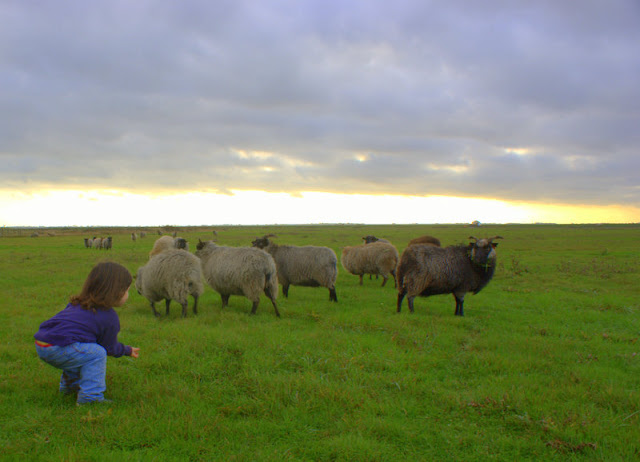 This is Goblin's 'I am not a threat to you' stance. He does this with any animal if he wants them to approach. I have seen him do it with dogs and cats but the sheep was a new one. 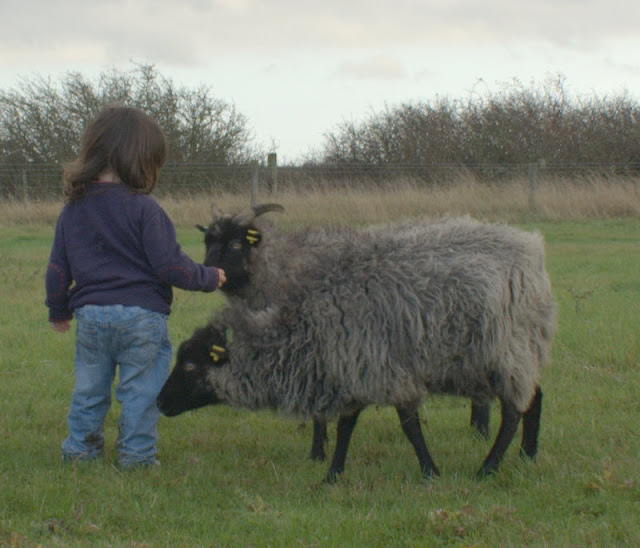 After feeding the sheep we played with some clay and made pots and stuff. I got so into this activity I forgot to take any photos. Goblin decided he wanted to play in the car instead. I'm normally not comfortable leaving Goblin to play in the car on his own because its usually parked on the road by our house and he can get in and out the doors. But at the farm its safe and enclosed and I'm happy to let him spend the time turning the indicators on and off and adjusting my mirrors and light settings! 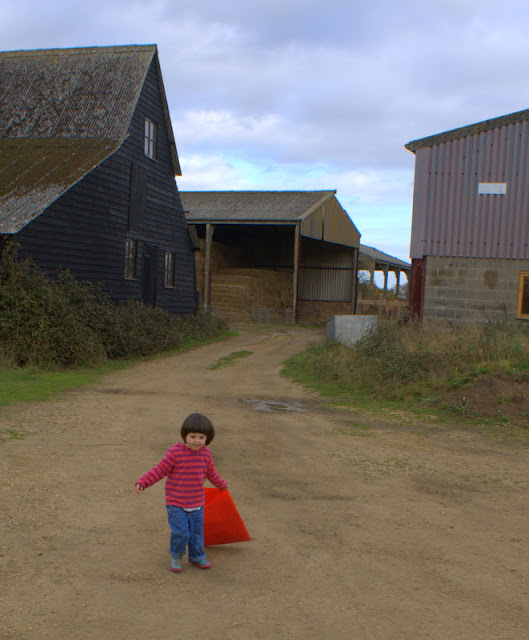 And when we were packing away the kids found one of my plastic sheets I'd brought for the activity. Elfin said it was her kite and ran around the yard with it.  Goblin decided it was his kite and did a runner with it. 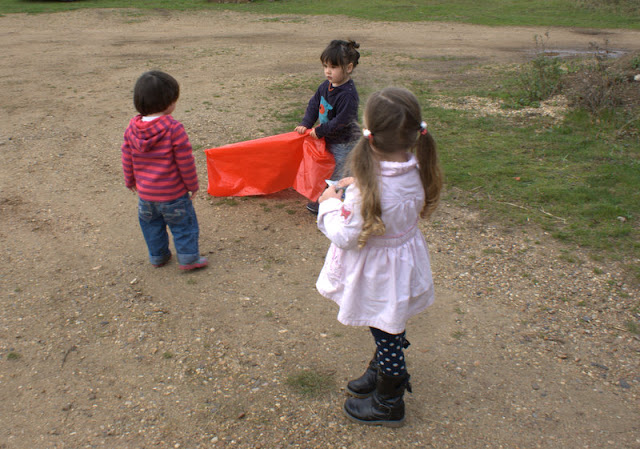 So we had an interesting lesson in learning to share. It wasn't 100% successful but it didn't end in tears so I count that as a plus. Being in the outdoors is great, but being in the outdoors with other lovely likeminded people and fun friendly kids is just fantastic.


I'm linking this post to the great outdoor play link up

Posted by The Monko at 21:54
Email ThisBlogThis!Share to TwitterShare to FacebookShare to Pinterest
Labels: 25 months, animals, nature nursery, outdoor play