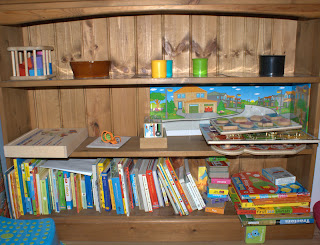 I have mentioned before that I have a set of shelves for Goblin's more educational toys and I rotate the toys out and replace them with new/different ones 'Montessori style'. What I probably didn't mention is how incredibly lazy I am - I tend to have the same toys out for about a month, and I cram loads on the shelves so Goblin has enough choice.
Recently I swapped some out and noticed that he instantly got interested in the shelves again. It finally dawned on me (even though every Montessori inspired blog says it) that I need to put less on the shelves and change it up more often.
So last night I stripped the shelves of all but the bare minium. And it worked. This morning Goblin came down and he went straight to the shelves and played with every single item, before reading half the books on the bottom shelf - thats a lot of books. Obviously when I say "read" I mean he handed them to me to read to him while he turned the pages. 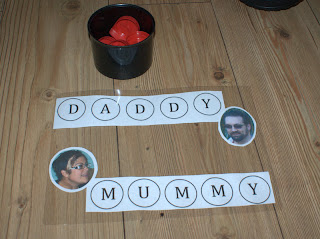 My main reason for swapping stuff out was to make space for the new toy I made Goblin. Its a letter matching game to introduce him to the shapes of letters and the sounds. 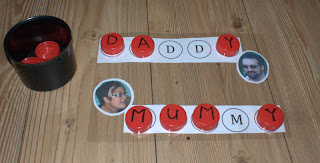 You take the letter written on the plastic top and match it to the letter on the word. And I tell Goblin the phonic. He was quite good at it.
The tops I am using are from Slimfast shakes that Hublet and I have been consuming over the past 2 months in a (surprisingly successful) attempt to lose weight. But milk carton tops, or the tops from the ready made formula bottles would do as well. 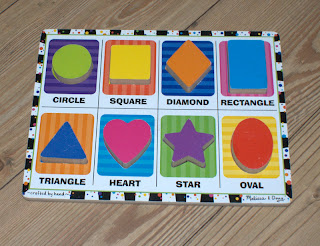 Goblin also enjoyed playing with his shape sorter and for once he actually took time to get all the shapes in - normally he gets frustrated and bored if he can't get a shape in instantly.
By contrast he wasn't interested at all in playing with the shape jigsaw as a puzzle, but he stacked the shapes like building blocks and told me some of the shapes. He finds it much easier to recognise hearts and stars than circles and squares which I find a bit odd. I told him what colour the shapes were to add to the learning.
I do love Melissa and Doug toys. As well as the shape puzzle Goblin spent time playing with his 'M+D' latch board. He has started telling me whats behind each door before he opens it. He likes "purple pony". 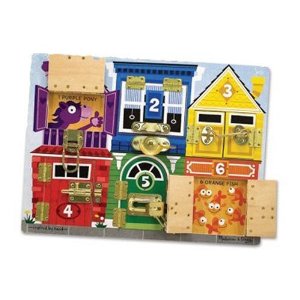 Goblin also played with the lacing, the 'M+D' sound blocks on the shelves. 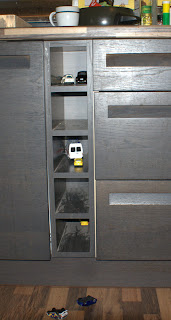 Later he moved to the kitchen. After using our empty wine rack as a multistory car park for his cars he fetched his broom and asked for some mess to sweep up. Unusually for my house I didn't have any "mess" to hand, so I made some with green lentils, and stuck a masking tape square on the floor for him to sweep them into. 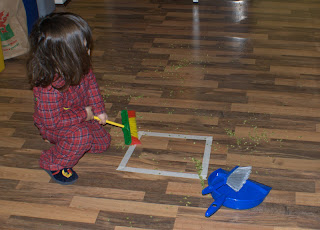 Unfortunately Goblin is currently really bad at sweeping and it didn't hold his interest for long. Instead he filled all his little trucks with lentils and spread them through the house (Cringe!). 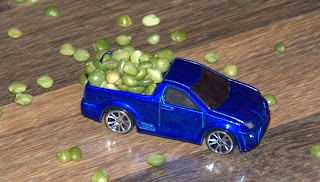 Then he put his trucks into his tractor. I had to take a photo of this - I don't know if it was total fluke that he matched the cars to the colour of the pots but I was excited. 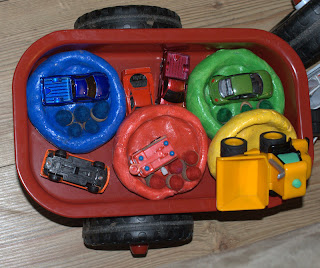