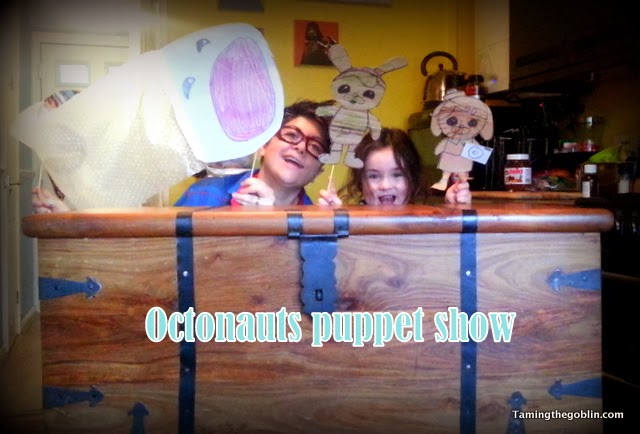 The other day Goblin came down in the morning and said he wanted to put on a puppet show.
"Hmm! OK" said I and we set to work creating some puppets. He is currently mildly obsessed with the Octonauts so our puppet theme was easily settled on.
Fortunately we have an Octonauts sticker book so I was able to use that as a reference to copy the characters. I nearly fell off my chair in surprise when Goblin agreed to colour them. Goblin flat out refuses to do colouring in usually. I have never insisted he 'stays in the lines' when colouring, but its obviously something he has picked up, and because he feels this is too tricky he normally just won't give it a go. He actually only agreed because I explained that we would cut them out afterwards so he didn't need to even attempt to stay in the lines. 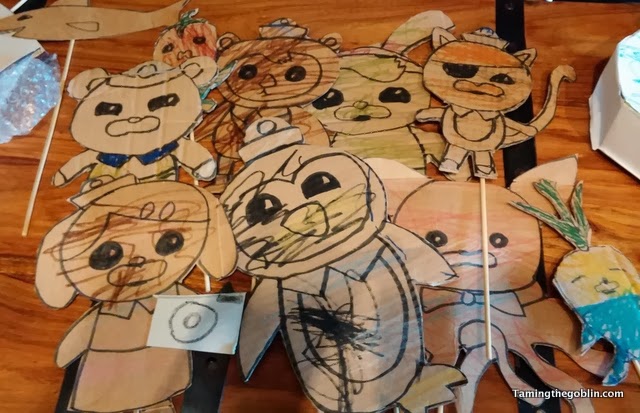 We attached kebab sticks to the back of each character and then hid under a chest to perform our show for Hublet. Below is our re-enactment of the Octonauts and the whale shark - one of Goblin's favourite episodes.

You can watch clips of the actual Octonauts on the cbeebies website.