(Goblin is 4 and likes cake)
(Apologies, this is a bit of a rambling Hublet post rather than my normal attempts at humour)

One advantage of Goblin being a bit older now is that we can start dragging him round places we always intend to visit as adults.  Generally these are attractions that we enjoyed as children but failed to go to despite living and working in London for years.  By lucky coincidence, he is inquisitive enough to enjoy some of this experience. 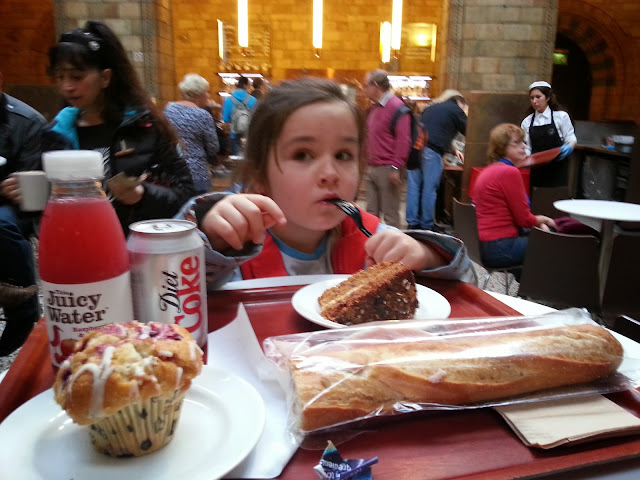 Goblin had been asking about whales recently (see Monko's earlier post on the aquarium) and I thought he might like to get an idea of how big they are.  I remember visiting the Natural History Museum in London as a child and being amazed at their life sized model of a blue whale, so it seemed the obvious choice.

One big advantage of commuting into London for work is that I have a season ticket for the train, so it doesn't cost anything to wander to the station on a whim and take a trip to the big smoke. Some days we don't even get that far and just ride up and down the line on the empty trains during the day.  This time we had a destination in mind though. 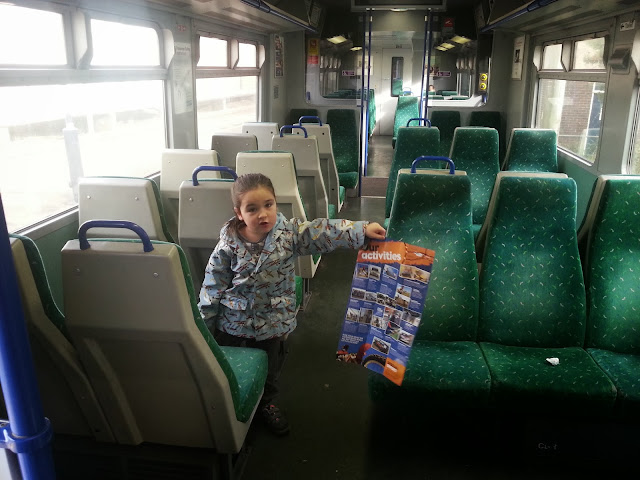 Our first attempt at visiting was a failure.  It was half term here, so obviously I decided that a Tuesday morning was a great time to go and visit one of the most popular tourist attractions in the capital.  We had a lovely journey on the train to London, then on the tube round to South Kensington things started to fall apart.
Goblin hasn't been napping recently, just getting really tired around 10:30am so I thought the 20 minute trip on the underground would be a good time to sit and relax.  He wanted to look at my phone (which I was using for directions) but was getting increasingly annoyed that the games I had weren't to his liking.  He grumpily had a go at Angry Birds until we started to approach our stop.

At this point I put my phone away, this was not an action Goblin approved of.

I managed to lead him off the train while he was still in the confusion of "What is going on?  Where is the phone?  What did you do to the birds of ill temper?" but then once on the platform the Irrational Tantrum(TM) kicked off.

There was the usual assortment of lying on the floor, hitting, screaming and utterly failing to listen when I asked what was wrong.  Normally he will calm down after a little while but he was just worked up into a tired grizzling frenzy.  This was all happening on a tube platform which was rammed with parents, buggies and children so eventually I gave him an ultimatum.  He had until I counted to ten to calm down or we wouldn't be going to the museum.
I counted to ten.
Goblin did not calm down.
So I walked him straight over to the other platform going back the way we came.

I am not sure who was more surprised, Goblin or the other parents.  Clearly following through is not a common occurrence for some families.
Goblin very soon pulled himself together and was able to tell me why we weren't going to the museum that day, which was good in a way, but didn't help much as we were now in London but still in "consequence" mode. 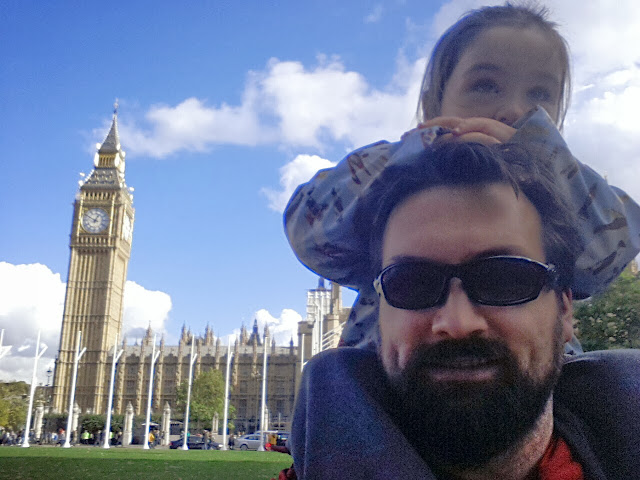 I had an idea though of something we could do which might be unintentionally fun.  I was due to work the next day, and was planning on popping into my office first thing in the morning to get my laptop for an off site meeting.  I decided that I could ostensibly "go into work and get my laptop" but make it something fun at the same time.  I work just behind parliament so Goblin got to go into my office, meet some of my colleagues, and then we walked back up Whitehall to Trafalgar square to get a bus back home.  Visiting daddy's office for the first time was nice, although the size and security to get in was a bit intimidating for him and he was rather disappointed to learn that work just entails sitting at a desk and typing.  We travelled back to the station on the top of a double decker bus having seen the soldiers at horseguards and looked forward to attempt two. 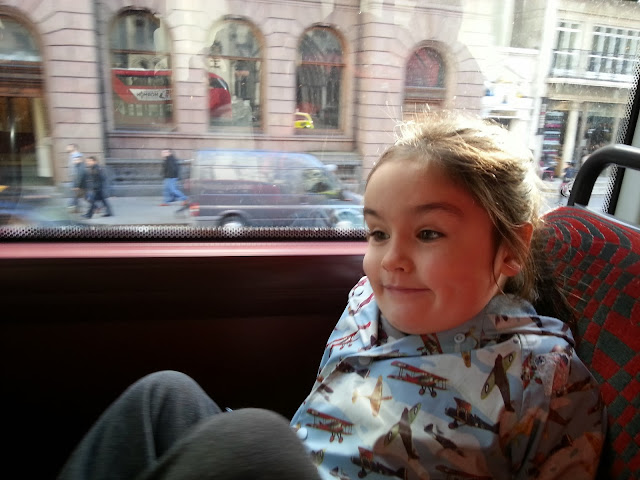 This happened a week later, it was not half term which made the whole thing easier.

We had another nice trip down on the train where Goblin met an elderly lady who was going to meet some friends.  The two of them chatted away happily for the whole journey, talking about spitfires (which the lady remembered flying over her house in the war).
This may be a British thing, but we don't talk to strangers, particularly on the train.  Goblin doesn't adhere to this rule and it was really nice seeing him engage with someone so openly, I sometimes wish we could do this as adults.  I then remember that I loathe everyone and the thought goes away.

I will skip the boring journey bits and go straight to the museum in a smash cut.

Upon entering the museum it became clear we were going to have to limit our visit.  It is a vast place with so much to see that we first stood in front of the map and made a plan, which was very quickly disregarded in favour of letting out feet guide us. 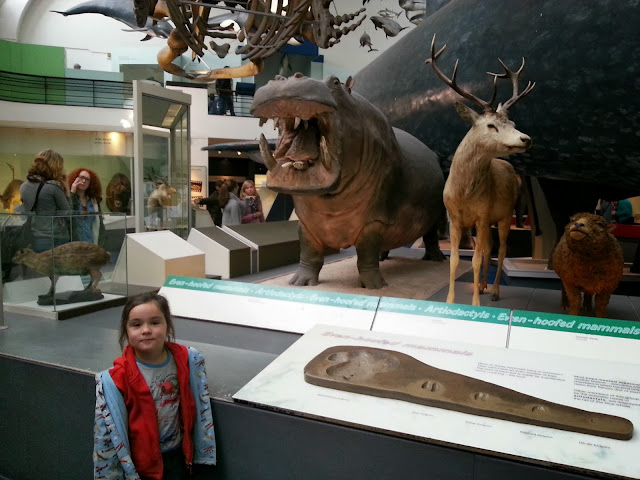 (Part of the blue whale model is in the background)

The museum is made up of some large galleries containing large displays and specimens, the rest is made up of hundreds of cabinets filled to bursting with stuffed animals.
Victorian England wasn't big on conservation, but they were experts at travelling the world, finding new species, then mercilessly slaughtering them to put on display.

It was quite tricky to explain stuffed animals to Goblin.  Not because he is squeamish, or because I wouldn't tell him the truth, but because it is actually an odd concept.
"Yes, they are real animals, they are just dead and filled with sand"
"No, they aren't really models, that is the real animal skin"
"Some of them still exist, some are extinct, but they did all exist at some point"
"Yes, all the birds in the cabinet of disembodied heads are dead"
"I have no idea what they did with the bodies"
"Yes, while unlikely, it is possible the scientists might have eaten them"

This is where I got to see just how inquisitive Goblin is, particularly in comparison to the groups of school children who were also visiting.
I don't know if it is something to do with the school kids being in groups, being afraid to appear stupid, or just these ones being less inquisitive, but Goblin was coming out with some amazing questions.
"Why is that egg pointy at the end?"
"Why aren't there giant birds?"
"What are the feathers made of?"
"Which of these animals can people eat?"
(I am pleased to note that Goblin seems to have inherited my Animal=Dinner mentality)

The school children seemed interested but just followed their teachers in a line listening to what they were told.  I hope we can keep Goblin inquisitive, I suspect his teachers may disagree.

We eventually found the room with the large mammals, these were mainly models (which led to another barrage of questions on real vs stuffed vs model vs edible) but were great for showing scale.
Goblin stood for half an hour asking about each of the whales and dolphins in this display alone.  They have some great interactive points too explaining how echolocation and migration patterns work.
Goblin said the whale was very big, but he thought a B52 was bigger. which I couldn't deny. 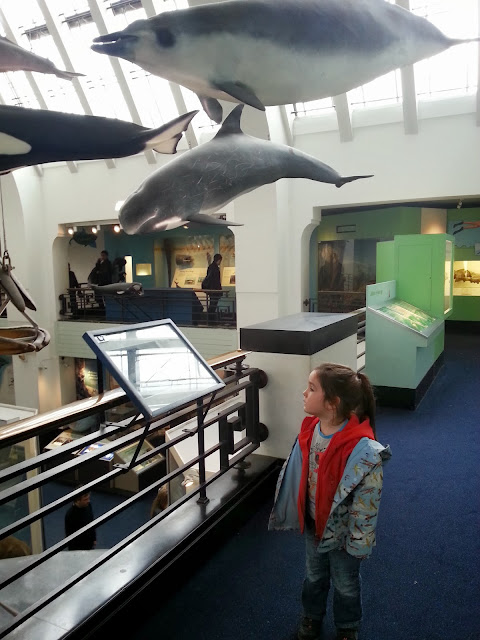 After refuelling in the museum cafe, we then headed out to a few more areas of interest.  The dinosaur exhibit was an utter failure for us as it is very noisy, so Goblin spent the whole time covering his ears and hiding from the animatronic T-Rex.
The concept of long periods of time is obviously lost on him too.  When I tried to explain how long ago dinosaurs lived we managed to get back as far as the time when Mummy and Daddy were little, but Goblin was not sure that time existed prior to this.

Strangely the creepy crawlies section was a big success with lots of great questions from Goblin.
He believed me that the giant robot scorpion wasn't alive, but quite sensibly he refused to turn his back on it, just in case. 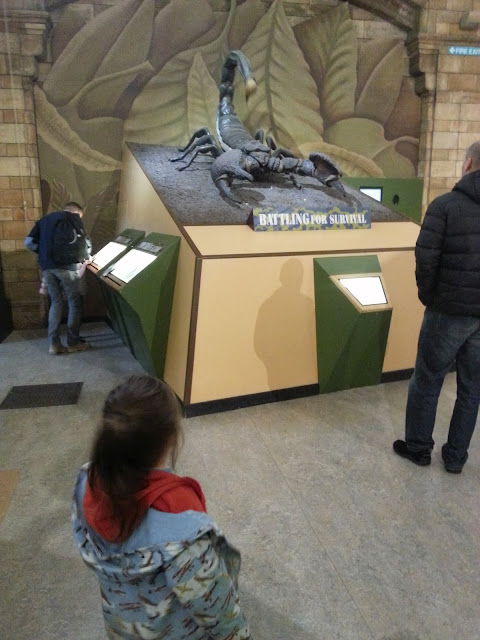 I find it hard not to push my ideas of what is interesting upon him in a place where I visited as a child.  I tried my hardest to articulate the marvel of the slice of giant Giant Sequoia in the main gallery but he just wanted to look at the pine cones.  I just have to accept we find different things entertaining.

We finished the visit with a look at the outdoor ice rink they put up every winter.
I had twisted my knee running the day before so couldn't take him for a skate which disappointed him, but maybe we can do that on our next trip. 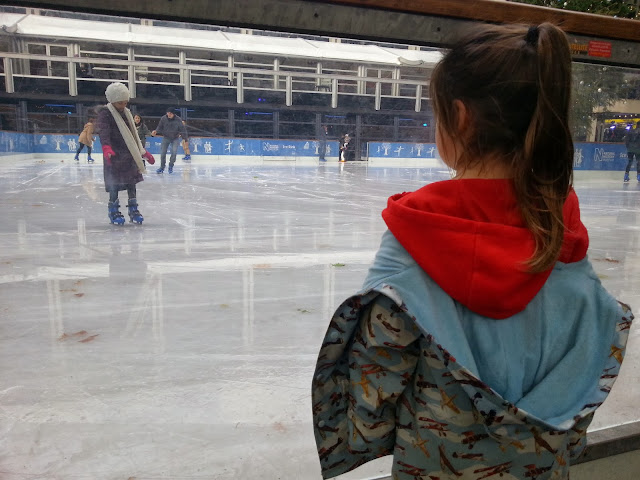 My faves from last week include
The Mompetition is us ~ PricklyMom
No, Don't and othe bad words ~Sand in my Toes
Why I don't like the baby stage ~ Dirt and Boogers
5 Ways to Build up your Toddlers ~ Pint Sizes Treasures
Welcome to The Sunday Parenting Party, hosted by Dirt and Boogers, Play Activities, Crayon Freckles, Taming the Goblin, The Golden Gleam, Prickly Mom, and The Tao of Poop. The SPP is place for readers to find ideas on nurturing, educating, and caring for children, as well as honest posts about the stresses of being a parent or caregiver. Links to reviews and giveaways are welcome as long as they are relevant to the topic. All parenting philosophies are welcome with one exception: please do not link to posts promoting physical discipline, as this is something we would feel uncomfortable having on our blogs. (P.S. By linking up you agree that your post and photos are Pinterest, Sulia, G+ and FB friendly. We will be showcasing ideas on The Sunday Parenting Party Pinterest board.)