Scissors, Straws and Playdough - What would your child do? 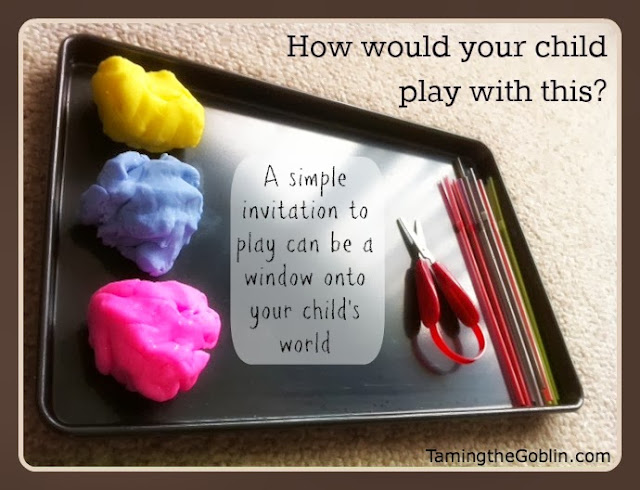 If you gave your child scissors, drinking straws and a lump of playdough and left them to make their own play, what would they do?
Do you think you know? Why not test your hypothesis?

Last week my friend and I set out to see whether presented with the same invitation to play our kids would act in a similar way, or differently. In carrying out our mini (not very scientific) experiment, we both took a lump of playdough, some drinking straws and a pair of decent scissors, laid them out for our child to find and then left them to their own devices. We remained present to assist if asked, but we did not offer any prompts or hints as to how they could direct their play. Here are the results: 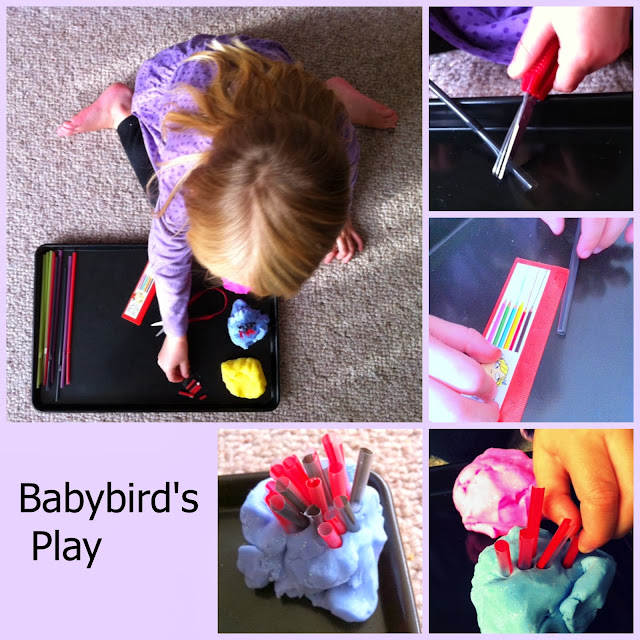 Babybird's focus was on the straws. She carefully cut lengths of straw. In fact she wanted the straws to be equal lengths so she asked her mum for a ruler. She measured the lengths and rejected any that she cut to the wrong length. Then, using the lumps of playdough that had been left for her she pressed the acceptable lengths into the top. She explained to her mum that these were hedgehogs.
Her play lasted about half an hour and while she didn't return to the equipment for further play, she was not keen for her mum to destroy her hedgehogs and insisted that they were packed away as they were. 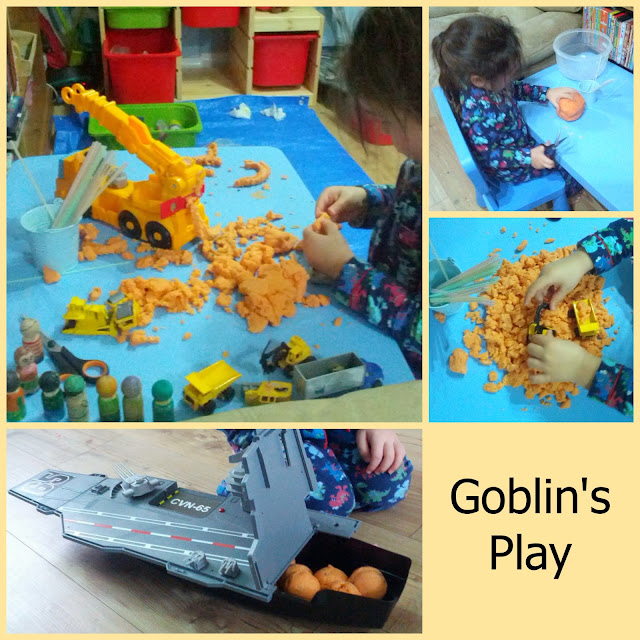 Goblin on the other hand ignored the straws entirely. He decided to cut the "skin" off the playdough. This led him to shred the entire ball of dough into tiny chopped up pieces. My initial conclusion was, while Babybird had created, Goblin had destroyed. However, I shouldn't have been so hasty with my assumption. Goblin then sought out his toy construction vehicles. He used the playdough as rubble and created an imaginary play setting where his vehicles sang and chatted as they worked. Then he fetched his crane (which has playdough tools attached to it). He created playdough barriers and lined up some toy people behind the barriers, to keep them safe as they watched. Then he started making playdough balls in a mould.
This inspired a new direction to his play. He created a bunch of these cannon balls and loaded them into his aircraft carrier, then he set up a 'baddy boat' and fired the cannons at it. He then got distracted. 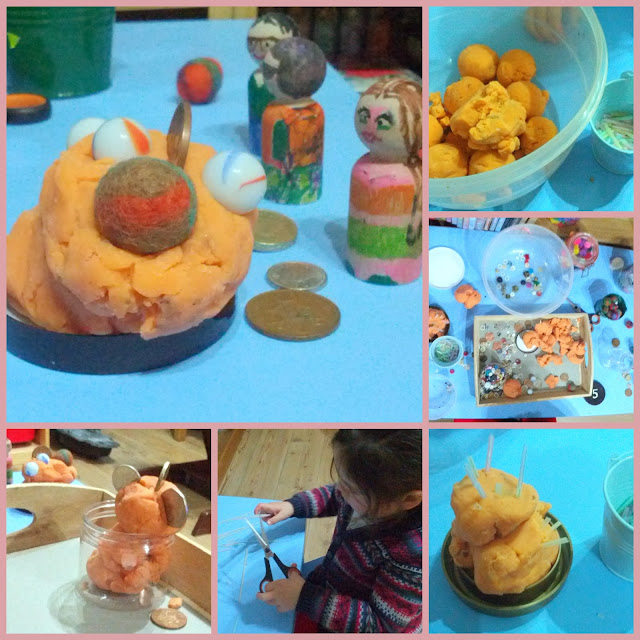 Later in the day Goblin returned to the equipment. This time his theme of choice was imaginary food play. First he served me chopped up straws (spaghetti) and playdough balls (meat balls). And then he made himself an ice cream. He started to open our jars of small loose parts and he created more ice creams with 'toppings', this time for his play people. He got our montessori money tray and gave the people coins to pay for the ice creams, and asked them all what flavour they'd like. We used this opportunity to do some coin recognition, before Goblin decided to use the coins to decorate the ice creams too.

This simple invitation to play can offered a fascinating insight into how our children think and how their play evolves. Why don't you try this with your child and please leave a comment letting us know what your child did.