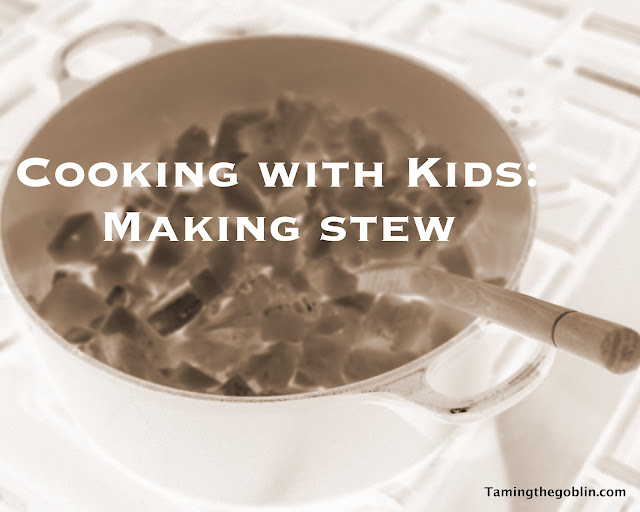 Goblin does a lot of baking with us, but baking is mainly measuring and stirring. I thought it was time that we taught him how to use a knife. He has used a butter knife to spread butter on toast and he has played with playdough and blunt knives. But in true Montessori style I wanted him to experience real cooking with a real knife. So we made a stew. I used to live off 'one pot wonders' when I was a student and this is my kind of cooking. You basically just take whatever you have in the cupboards and put it all in a pot and boil it up.
Our stew contained 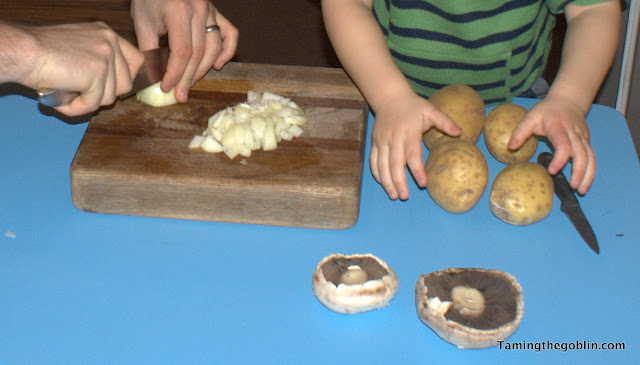 The aim of the cooking was to teach Goblin the basics of using a sharp knife. Goblin is now tall enough to reach the kitchen surfaces and has a rather annoying habit of taking his chair into the kitchen so he can climb up to see what's on them. So its important that he knows that knives can be dangerous and there is a way to use them safely.
It is far safer to have a sharp knife than try to use a blunt one to cut something. So the first thing Hublet did was sharpen a knife for Goblin. We keep all our knives very sharp anyway. But it was good for Goblin to see how Hublet sharpened it.
We brought Goblin's table into the kitchen because its just the right height for him to safely cut at. I didn't want to add any element of danger by balancing him on a stool at the higher kitchen counter. 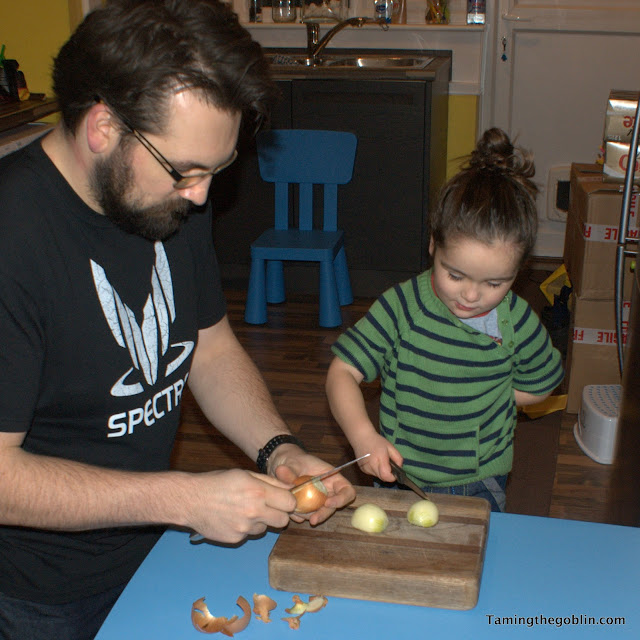 We haven't introduced Goblin to sharp knives before now because he hasn't been great at following basic instructions. There are two fundamental rules that we asked Goblin to follow.
1. The knife stays at the table. He must not move away from the table with the knife. If he wanted to go and get something or wash his hands or just sit down the knife had to be put back on the table. This avoids accidental stabbing of himself or others.
2. Wait until we say before using the knife. The photo above was him disregarding that rule and trying to cut an onion when no one was holding it for him. I'd asked him to put his other hand behind his back so he didn't accidentally chop off his fingers. As it turned out he needed to hold the knife with two hands to get the pressure he needed to cut. 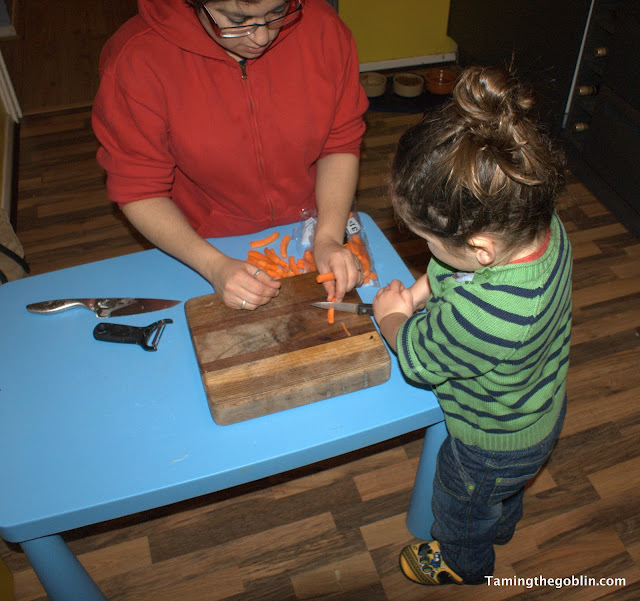 We opted for a non serrated knife. Children tend to use a serrated knife like a saw. That's fine but its not  the best way to cut most vegetables so we tried to match the right tool to the right job. We found that mushrooms and carrot battons were the easiest for him to cut. The onion was a bit more tricky because it has a curved body. And we didn't get to try out the potato because he lost interest. 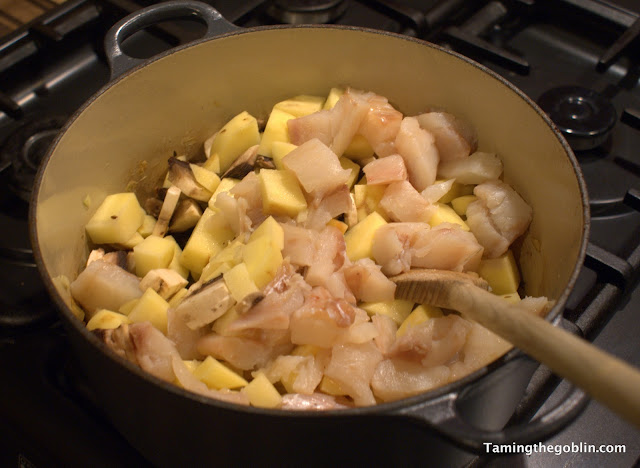 He wasn't interested in cutting the haddock with a pair of scissors. Later I asked him why he hadn't wanted to do it and he told me it was because he wasn't allowed to cut anything except paper with scissors (a rule I had implemented after he went on a bit of a scissor cutting spree). Bless him for remembering that rule! 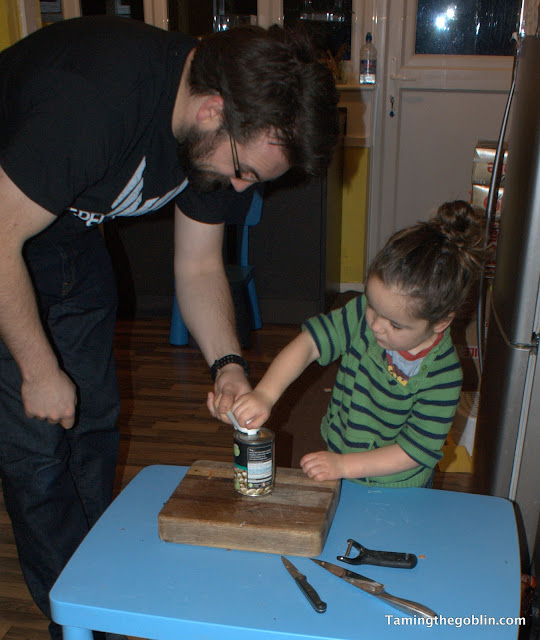 As well as chopping Goblin tried the can opener. He needed a bit of help from Hublet because it was too stiff. He also peeled three of the potatoes for the stew. When everything was in the pot we boiled it up and left it to simmer for about an hour. Goblin described that final product as "really yummy". I call that a result. 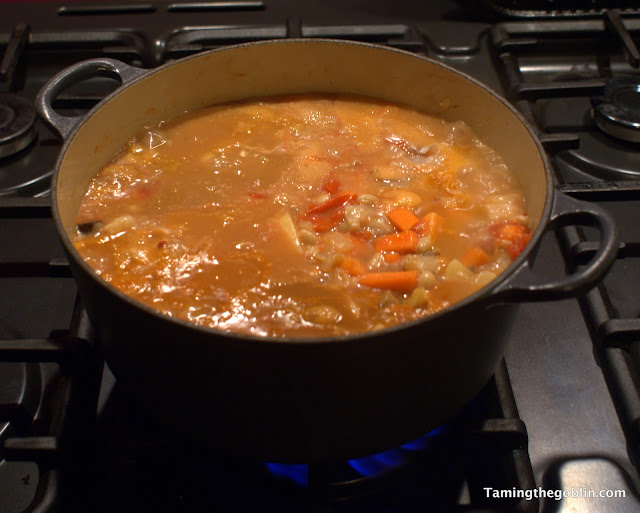 Posted by The Monko at 10:00
Email ThisBlogThis!Share to TwitterShare to FacebookShare to Pinterest
Labels: 38 months, cooking, meals, Montessori