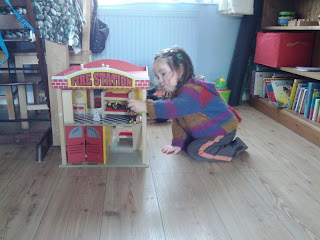 Despite the fact that, or maybe because, Goblin is heavily into all things vehicle based, I had been musing about buy him a dolls house. I didn't want him to miss out on the opportunity to play with tiny dolls and tiny furniture just because its typically considered a girl's toy. I'd held off because the ones I'd seen on ebay were quite expensive and I didn't want to spend a lot of money on something if he wasn't going to play with it. 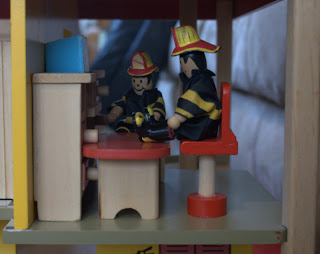 And then my friend offered us their toy Fire Station. I jumped at it. I assumed it was just a "garage" and Goblin would enjoy driving his fire engines in and out of it. But when she gave it to me she also gave us a box of things. The things included chairs, a table, a side board, a TV, a cupboard, bunk beds, a sink, two firemen and a dog, as well as a wooden fire engine. I thought Goblin would be most interested in the Fire Engine. But I was wrong. He was enthralled by the tiny firemen and their home. He spent ages placing them on chairs and telling me to "put a DVD on" for them. It took quite a bit of fine motor skill and manipulation to balance them on the chairs, but Goblin persisted. 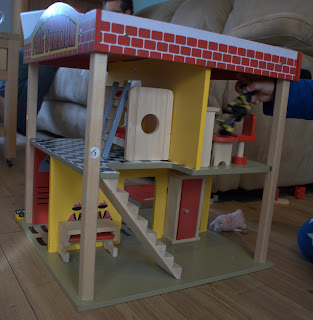 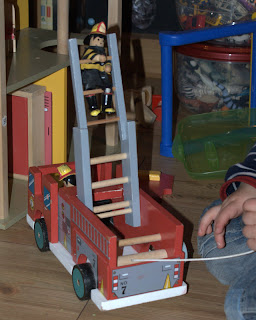 And he did play with the fire engine, but in a more people focussed way - getting the firemen to climb the ladder and hold the hose. He even went and got his bins from his toy bin lorry and got the firemen to "take the bins out".  He is replaying his day to day experiences through his little firemen dolls. 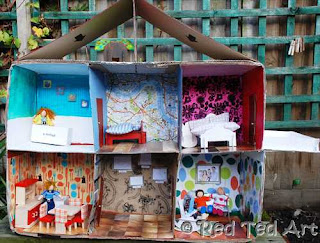 I think dolls houses offer an amazing play experience for little children. If you aren't lucky enough to have one given to you, you could always make your own. There is a great tutorial over at Red Ted Art and they also have tutorials on how to make lots of different cute doll house furniture.