(Goblin is 28 months)
Goblin and I have been having fun with letters. This isn't an attempt to have him reading by the age of three, its just a very light hearted opportunity to look at the concept of letters - which he sees around him every day.

When Goblin is tired he likes watching YouTube clips. I found many different versions of the 'A B C song' on there. This is our favourite version.
Unfortunately because its American they say "Zee" rather than "Zed". Hublet and I have to shout "Zed" over the video when it gets to the end. Goblin has obviously been taking it in because he's started singing it to himself. His version is quite unique! He's got the 'a,b,c,d' down. But then it usually goes something like 'a b c d e b e' 'a b a b n m n m p' ' q r s  u u e' 'w x u u v' 'now I know no no no no'.
Within a week I have seen a dramatic increase in the number of letters he has added to the song correctly so it won't be long before he can actually sing the whole thing.

As well as singing the 'a b c song' which teaches the names of the letters, I have tried to introduce some letter shape recognition and phonic sounds. I saw a great Montessori idea at We can do all things which used magnetic letters on a tray as a matching activity. I tried it with Goblin using our white board (which is metal so the magnets stick). 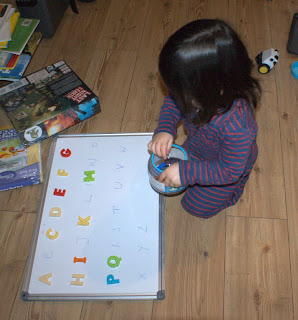 Unfortunately he was more interested in collecting up the letters and putting them in his tractor than matching them to the written ones. But at least I got to tell him which letters he was putting in his tractor. 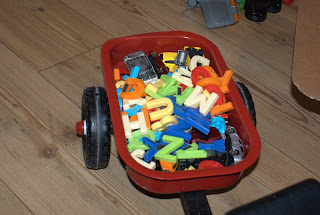 He seems to recognise capital M - I say "'mmm' is for Mummy", although he also thinks a capital E is also an M - I guess if you turn it on its side it is. 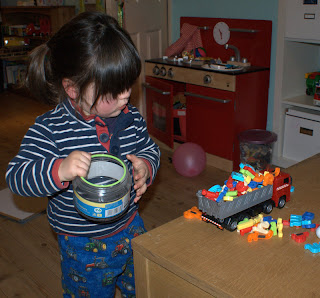 as well. Goblin has now mixed the two sets together. At some point we will play matching lower and upper case, but thats far too advanced for him at the moment. At the moment I just tell him what the letter name and sound are - I hope I'm not confusing him by using a mix of upper and lower case. 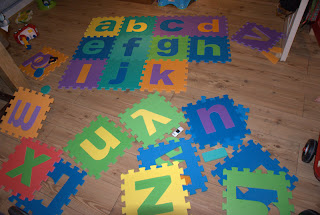 We have a foam alphabet puzzle

. Goblin likes puzzles at the moment so this is a good one - except I think he is teething at the moment because he keeps chewing the foam. 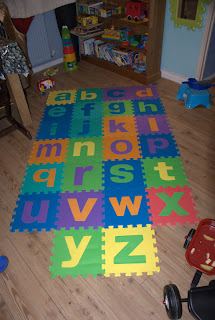 When it is fully together we play the jumping game jumping onto letters. I say "where is the O" and jump to the O. Then I get Goblin to jump to a letter - I have to tell him where the letter is at the moment but I'm hoping the physical activity of moving from one letter to another might help him to learn the letter shapes. 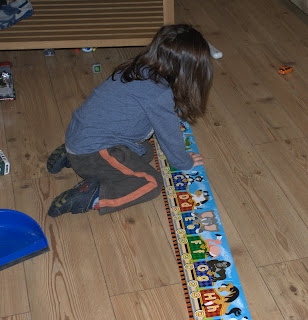 . Its great because it has an animal in each carriage that starts with the letter on the side of the carriage. This makes it easier for Goblin to find the right letter. He put the puzzle together with some help from me. Its very long. And then he spent quite a long time finding letters (with lots of help from me and Hublet). When he found the D for dog I said "that's also D for [Goblin's real name]" and Goblin said "and D for Daddy". I was too excited for words.