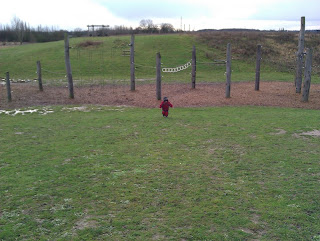 Despite Goblin being a bit under the weather this week we still managed to have a busy and fun day today. We met up with Baby bird, Elfin and another friend (and their mums of course) for a play date in the country park. Goblin's new thing is asking to go "running". It just means he wants to hurtle around like a mentalist, and the country park is a great place for this because its far away from any roads or traffic, it is open so you can see the kids for miles; And it has lots of fun stuff to play on when you have done your hurtling. It was quite cold and wet and we were the only folks daft enough to be out. That meant we had all the play equipment to ourselves which was fantastic. 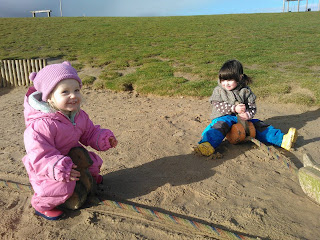 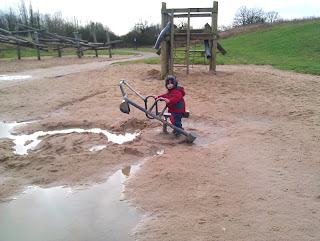 Usually Goblin has to queue behind a bunch of big kids to play on the digger but today it was all his - well he did have to share it with the girls, but they didn't seem that bothered by it. 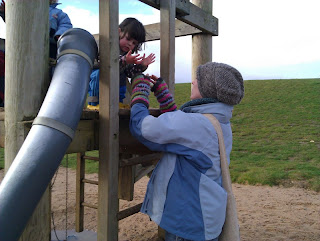 They did like the sand tower though. Its a wooden platform with ladders going up to it. There are shoots coming off it and you can pull sand up using little buckets on chains, then stick the sand down the shoots.
Again this is usually rammed with older kids and Goblin hardly gets a look in. But today he and his friend were able to play on this in peace for quite a while - there is definitely something to be said for going out in the cold and wet. 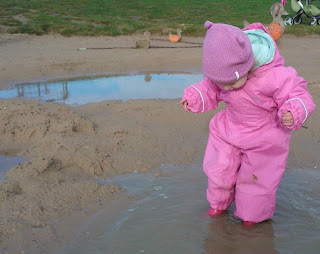 Having said that I think Baby bird regretted her decision to go puddle jumping. She got really cold after the rain seeped in under her waterproof trousers. But it was a good excuse for us all to go and have a cup of coffee. And after all that hurtling Goblin had a monster nap when we got home so I got a rest too.