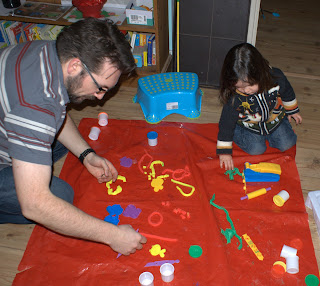 While out shopping we found an awesome super cheap playdough set with lots of fun tools including stamps, cutters and one of those squishers that you push the playdough in and push down a lever and wiggly worms come out the other end. Goblin was enchanted by this. He spent an hour and a half playing with me and Hublet, getting us to push the playdough in the hole so he could push down the handle. Then he'd take the 'worms' and chop them up. I don't think I have every played anything with Goblin for an hour and a half. I was amazed.

A couple of weeks ago I posted about Geek Dad's top five Christmas presents. One of those was a stick. Goblin demonstrated that Geek Dad was right. He found an old broom handle in the cupboard under our stairs. He spent ages carrying it around. Eventually he started riding it like a horse. To make it a bit more horsey I quickly drew a horse face on two bits of paper and taped them to either side of the stick - instant hobby horse! 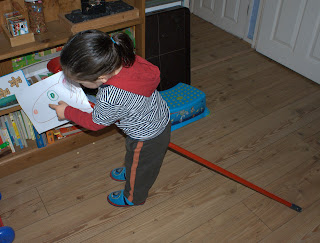 I was reading about Maria Montessori's theories the other day and noted that she said children like order. I wondered about this because Goblin is pretty darn good at creating chaos and mess, and we aren't a very routine based family - he naps when he needs to naps and eats when he wants to, to a greater or lesser extent. But then I noticed that he does like order when it comes to his vehicles. Goblin is always lining them up. 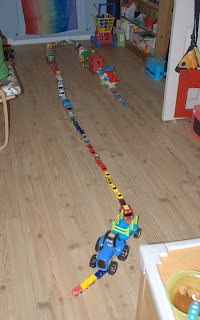 The other day I joined in his play and we lined up all the vehicles we could find. It took us quite a while but it was really fun and Goblin was very pleased.

I never thought I'd be the kind of parent who would buy little toy cars whenever I found them. In fact I used to be the kind of judgmental non-parent who actively looked down on people who showered their kids with toys all the time. But little cars are so useful - you can use them for counting and colour matching and keeping your child entertained in coffee shops and on journeys and even in the trolley in the super market. I am a total toy car convert. I wonder if I'd be buying toy cars if I had a girl?

Posted by The Monko at 22:17
Email ThisBlogThis!Share to TwitterShare to FacebookShare to Pinterest
Labels: 26 months, open ended play, playdough, vehicles