(Goblin is 26 months old)
This week I decided to do some number play with Goblin. He's been getting increasingly interested in numbers and counting and I thought I would build on that. Unfortunately he hasn't been well (again) this week and most of our activities have been short lived and not very successful. But I thought I'd post about what I'd been attempting anyway.

For me Christmas and chocolate coins are synonymous so we did some Christmas themed counting with chocolate coins as counters. They sat unloved on the shelf for the best part of the week so eventually I pulled them down and laid out the numbered paper, said the names of the numbers and then counted out the right number of chocolate coins. I was hoping that Goblin would join in, at least in laying out the coins, but he really wasn't in the mood. One we can revisit another time. 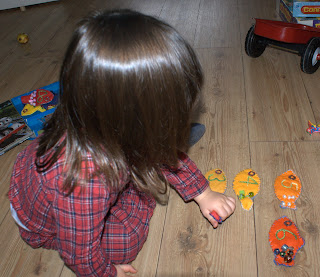 Goblin's counting fish were also on his shelves this week. They got a bit more play time. He got them down a few times and played with them using his magnetic fishing rod. Normally I just leave him to play at picking them up - its good practice for accuracy and manipulation. But this week I put them in order (I made them out of different shades of felt so they get darker as the numbers get higher). I was trying to get him to pick up certain numbers but he couldn't do that - he hasn't  got number symbol recognition yet - so I let him pick the fish and then I told him the number that was embroidered on it. 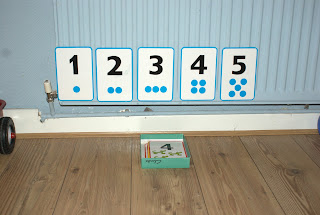 To help with his number recognition I stuck some flash cards on the radiator - down low where he could get to them. I put some other flash cards in a box so Goblin could match them up. 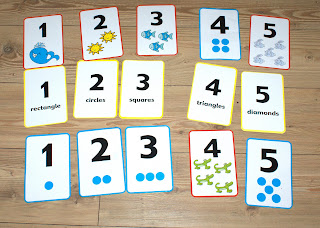 He used to like doing this about 6 months ago when the numbers didn't mean anything. So I thought he'd enjoy it again, but he showed no interest at all. Eventually I got the cards out to try and encourage him but he was more interested in naming the animals and shapes on the cards than matching them. That did give me the opportunity to count the animals as I matched them up to the numbers, and said the number on the card. Not what I'd intended but at least we were talking numbers. 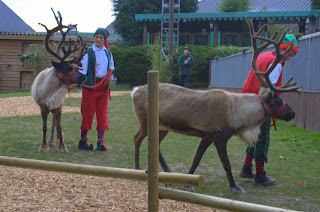 Until I had Goblin I never really thought about the distinction between counting and reciting numbers. Counting being actually recognising the quantities associated with numbers, and reciting being the ability to say numbers in the right order. What has surprised me with Goblin is that the counting seems to have come before the reciting. Well, for the number 2 at least. If he sees two objects next to each other he'll say "two".  He doesn't say two if there are three objects, or one object so I assume he is actually recognising that the quantity in front of him is 2. We went to the zoo the other day and we saw some reindeer. He said "Look two moose". I have no idea where he learnt the word moose (I'm guessing nursery), he has learnt loads of animal names at home but we don't have any moose toys or pictures. 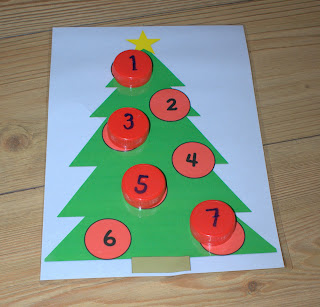 One of the activities that I was really excited about sharing with Goblin was the number matching christmas tree. He's really enjoyed doing the letter matching games with the red tops, so I thought I'd try him on numbers. But this week he hasn't wanted to go anywhere near them other than to take the bowl of red tops and upend them on the floor - which he has done several times to exhibit his frustration at something. I think I'll leave this game out next week and hopefully if he's a bit less full of snot he might get round to it.
The week hasn't been a total loss though. We have done lots of counting where he points at objects and I recite the numbers. Sometimes he will say them after me - especially if we watch the intro credits to "Show Me Show Me".
We also count wheels on his cars and windows on the "double bus" (double decker bus - Goblin can't do the 'decker' bit).  He seems to really enjoy "counting".

I'm linking up to

Posted by The Monko at 22:16
Email ThisBlogThis!Share to TwitterShare to FacebookShare to Pinterest
Labels: 26 months, Christmas, Montessori, numbers, tot school