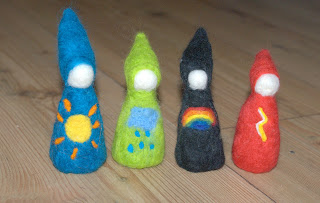 I have been doing quite a lot of craft stuff recently but most of it is for Christmas presents so I can't post about it until I have given the presents to people. But my friend in Oz asked me to make her some gnomes, and since she knows I am doing it I thought it would be OK to post about this one.
So here is a little tutorial on how to make super cute gnomes: 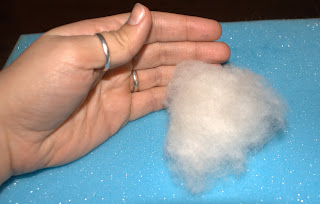 First grab a small pinch of plain wool to make the head. I have my hand in the photo so you can get an idea of size - this bundle is actually a bit bigger than I should have used and I ended up having to shape the head into the hat to get rid of some of it - so I'd say slightly less than in the picture. 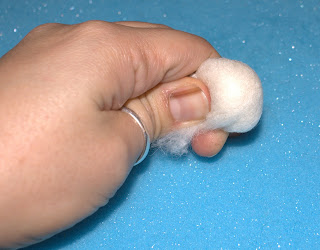 Shape it into a round with the neck bit between your fingers and thumb. And start to stab around the neck area to pin down the shape. 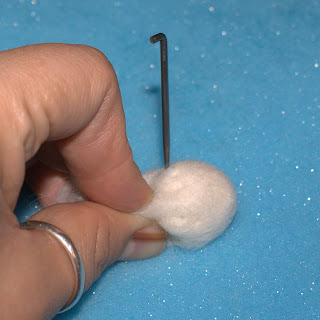 Once the neck area is held you can stab around the head to shape it. You don't need to go too mad with the head, it doesn't need to be stabbed too tightly. 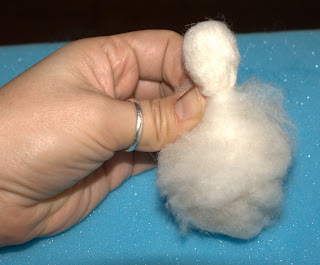 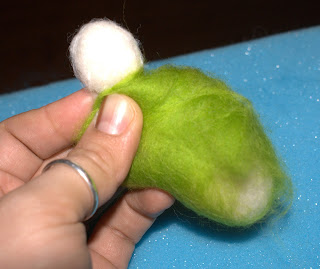 Then take the roving wool in what ever colour you want and wrap it round the body. Try and make sure it covers any of the white in the body. But don't worry if it doesn't at first because you can always add more wool later or reposition the wool as you stab it. 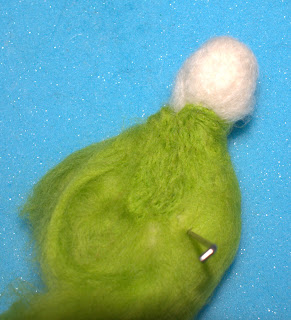 Start at the neck and working your way down the body stab the wool to flatten and shape it. I usually work all the way round the cone first and then stab the bottom flat at the end. 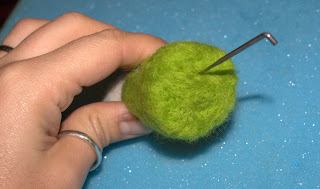 Once you have stabbed the bottom flat you will probably need to go back up the edges and neaten up the area where the cone and bottom meet.
Note: If you stab too hard the white wool will start to poke out the other side of the gnome. If this happens you can either gently poke it back in from that side or take some more coloured wool and place it over the white area and gently stab it in. 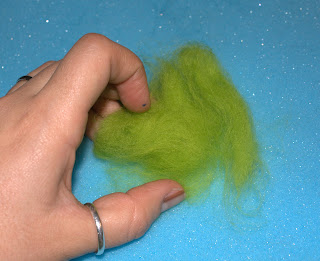 Next take another bundle off coloured wool and shape it into a flat triangle. Stab along the sides and then work across the triangle to secure the wool in place. Turn it over and gently stab the other ide to stop it being too fluffy - dont stab it too hard or you will just end up with it fluffy on both sides. 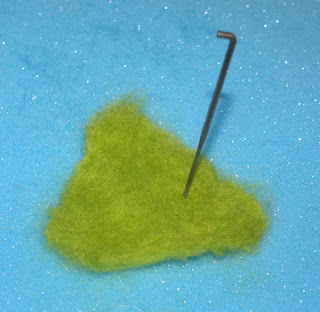 Fold the triangle in half and stab the two sides together to secure it into a cone. Wrap the bottom of the cone around the head of the gnome. Stab gently around the edge of the hat to secure in place. Don't forget to stab at the back between the neck and the cone hat to neaten up the back too. 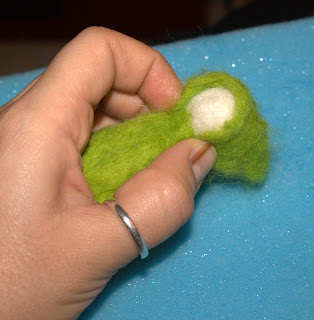 There you have your basic gnome. 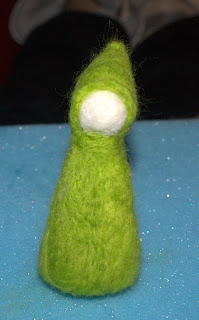 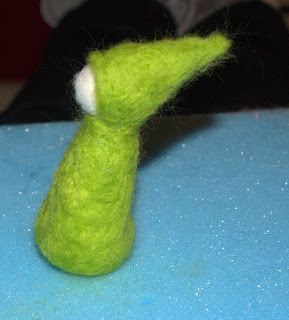 If you want, you can then decorate it. I've made number gnomes in the past. My latest ones are weather gnomes. This one is rain. You only need the tiniest amount of wool to make the pictures on the front. The great thing is, if you mess up, you can just felt a bit of green over the top and try again. 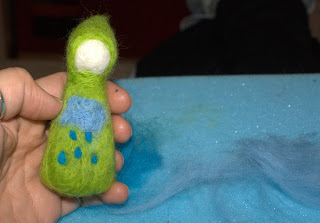 And here are the weather gnomes that will soon be winging their way to Australia.

If you are in the UK I have found a great new source of wool http://www.worldofwool.co.uk/

Posted by The Monko at 11:05
Email ThisBlogThis!Share to TwitterShare to FacebookShare to Pinterest
Labels: Mummy's crafts, needle felt, Waldorf Steiner