(Goblin is 26 months old)
A while ago I read "Playful Parenting" by Lawrence J Cohen.

When I say 'read', I did my usual thing of getting halfway through it and getting bored. Even though what I was reading made a lot of sense it started to get repetitive and I felt I'd got the gist. It may not sound like a good way to 'do' parenting books but for me, dipping in and out helps me think about my method of parenting rather than trying to follow someone else's.
Anyway one of the things that stuck with me from the book was that toddlers are often powerless, or made to feel powerless. They need someone to help them do nearly everything and on top of that they fall over lots and very rarely get to make actual choices that are taken seriously. Cohen suggests lots of ways that you can help give your toddler back some of the power. This improves self esteem and simply put makes them happy.

While at Nanny's for Christmas we (the entire family) unwittingly took part in just such an exercise. We were sitting around chatting and Goblin was playing. Hublet was lying on the floor and Goblin pointed to him and said "sleep". Hublet started to pretend to snore and closed his eyes. He carried on snoring until Goblin came up really close and shouted at him, at which point he pretended to be startled awake.
Goblin was so pleased with this new game that he proceeded to make the whole room sleep. 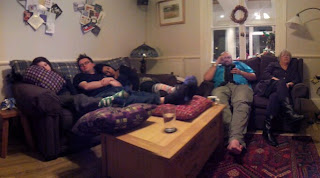 Then he took turns waking people up and sending them back to sleep. Everyone was so tired after a hard days Christmassing that they were more than happy to play a game that involved sitting still with their eyes shut. And Goblin got the most amazing sense of empowerment from being able to command the adults to do his will.
We have played this game a few times since then and Goblin is still delighted when his 'sleep' command conjures up snores and closed eyes. Really simple and really effective.