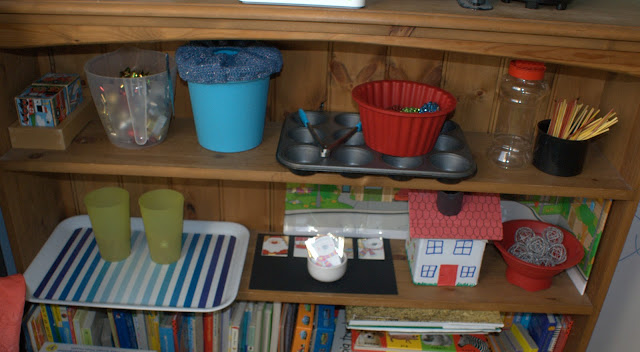 This week I have gone back to basics with Goblin's shelves. I think I have been pushing him towards activities that are too difficult and beyond his ability. I got carried away with the fact he showed an interest in counting, and tried to turn all his activities into number based ones. The result was he ignored his shelves all week and just played with his cars and did lots of sensory activities like cooking, playdough and water play. So I observed him, and listened to my instincts and opted to go right back to the simple stuff. Goblin likes this stuff and has fun, and thats whats important.

So on his shelves this week I have:
pouring - Christmas themes with red and green rice and sparkley 'happy christmas' glitter; 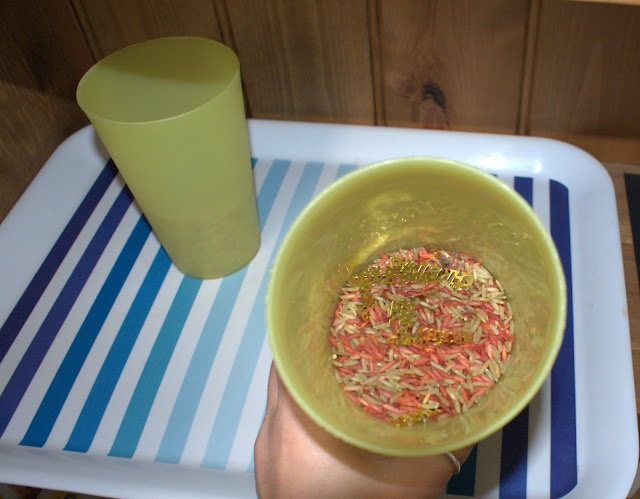 matching - I found some gift tags with double sided tape on the back so I have stuck 4 down on a card and left the rest in a pot for Goblin to sort under the ones on the card; 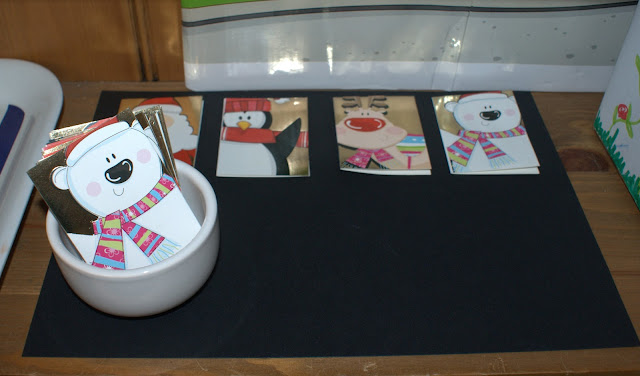 Tonging and one to one correspondence - I found some glittery pine cones in our random book shop and put them in a bowl for Goblin to tong into a muffin tin; 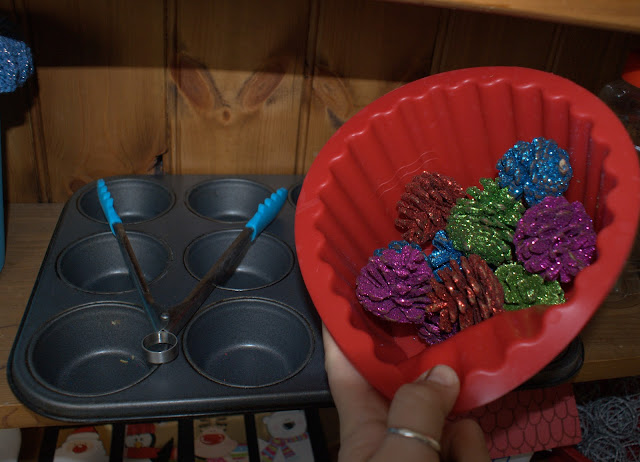 Pincer grip and accuracy - I bought a bag of those christmas present bows, and I am using my pot from the gnome counting game and some craft tweezers so Goblin can lift them and slot them into the hole in the pot. 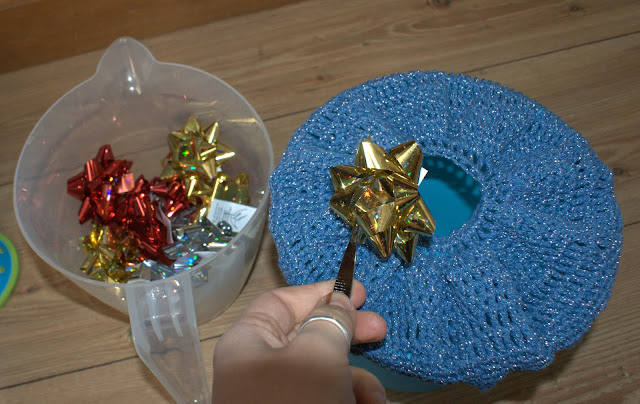 I also have his christmas house with balls that go down the chimney, a pasta shaker and kebab sticks, and his sound cubes.
I changed up his shelves while he was taking a nap. We were due to go to Nanny's in the afternoon so when he woke up I got him dressed and put his shoes and coat on. We were just about to leave and I nipped into the living room to get something. Goblin followed me and saw the shelves. The shelves he'd ignored for about a fortnight. And before I could stop him he'd taken down two separate games and started to play.  I think this demonstrates that I simply had the wring stuff out last week. 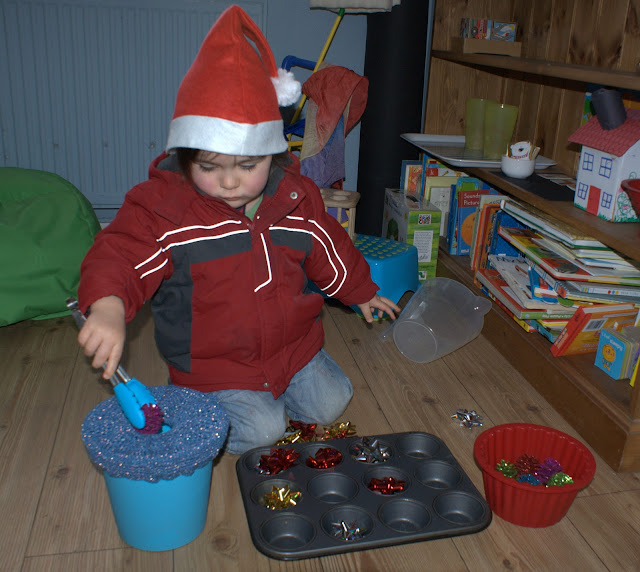 The glitter pine cone one to one correspondence work was a great hit. He has played with it again and again. 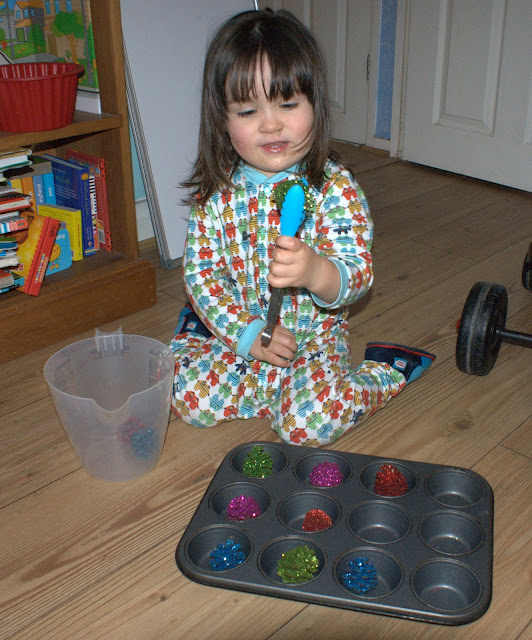 When he fills up all the slots he gets me to put them back in the jug and starts again.
And again! 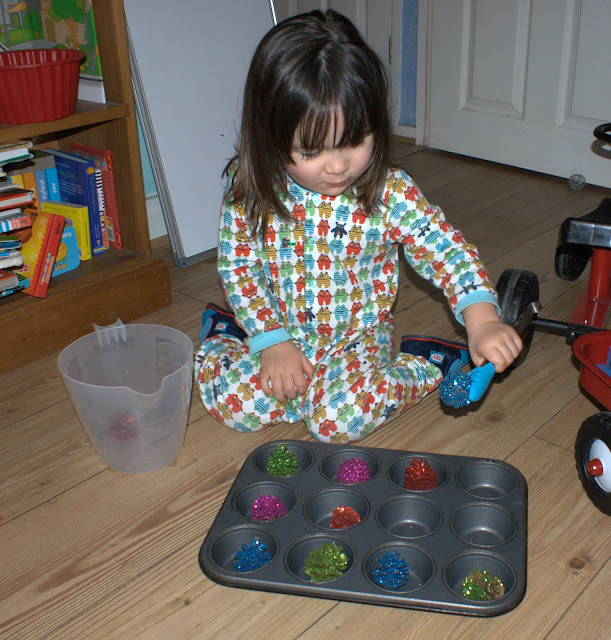 As well as his activities on his shelf we have been doing a bit of art. Goblin gets really excited by rockets. So we made one out of a kitchen roll tube. And Goblin painted it. 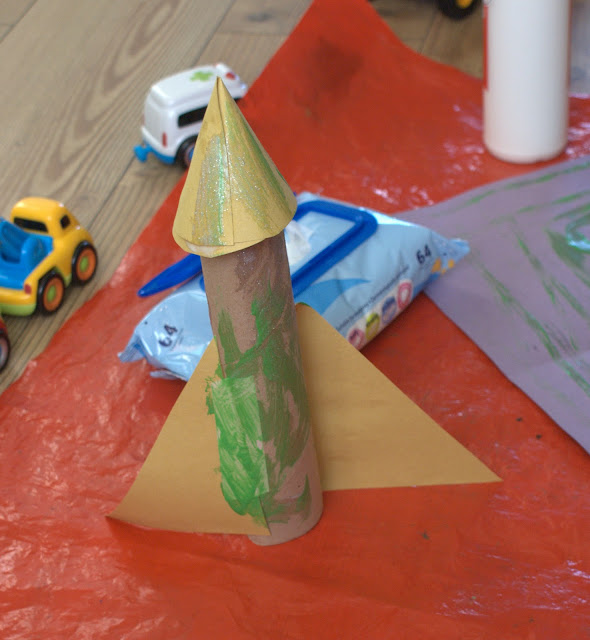 He also painted his hands - again! 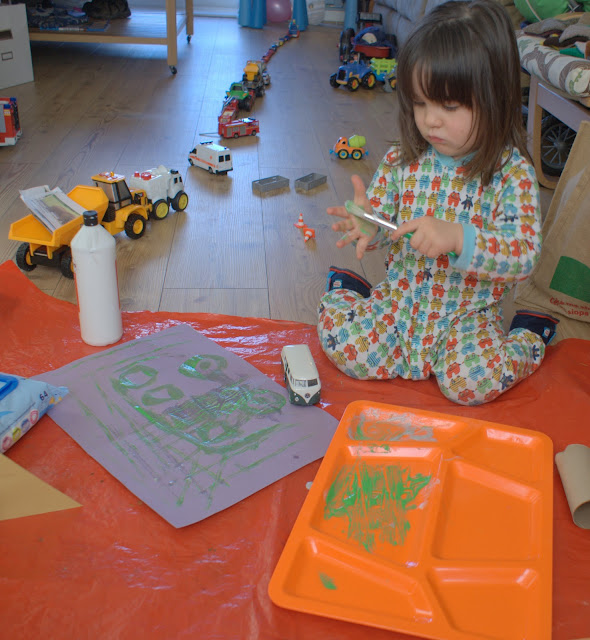 And finally I wanted to post about another activity I tried with Goblin. I found it on another blog and I even left a post saying how great it was and that I'd need to try it out, but now I can't remember which blog it was I found it on so I can't reference them (Sorry if it was you). 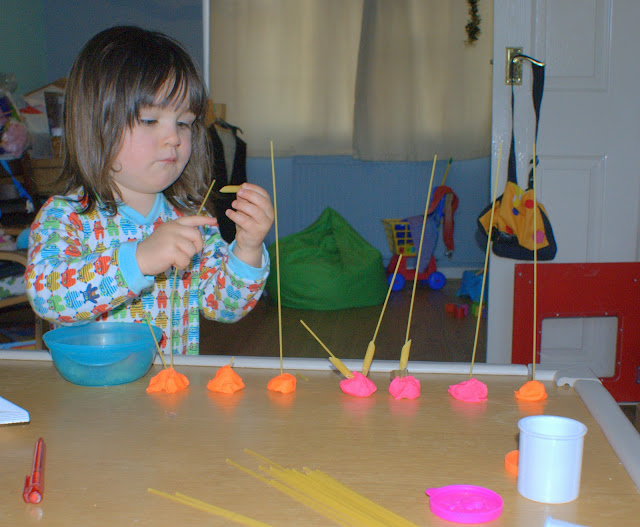 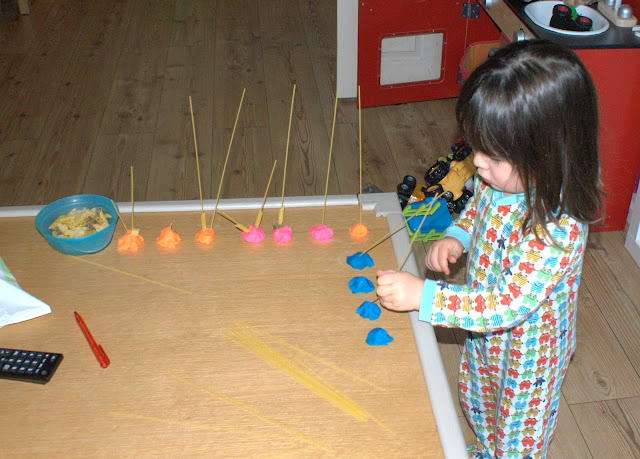 But before I did he got quite into pushing the spaghetti into the playdough. This was a really good exercise because he had to be firm but gentle, if he was too rough he'd break the spaghetti and if he wasn't firm enough he wouldn't get it to stand up.  Next time I do this I will use penne with straight edges, the stuff I had was cut on the diagonal and that made it even harder for Goblin to thread. He enjoyed trying though.