(Goblin is 23 months)
This week Goblin and his little chums visited Marsh Farm. This will probably be the last visit where Goblin gets free entry because after children are 2 years old they have to pay. Its not the cheapest day out - £9 for adults and £7 for over 2 year olds - but Goblin will happily stay for 5 hours so it makes it worth while. And its usually not too busy and crowded even during the summer holidays. We love it so much we have bought season tickets - these are totally worth it if you go more than 4 times in a year. 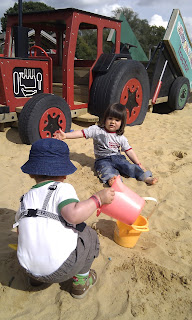 Goblin's favourite part of the farm is the giant sand pit with wooden vehicles in it. This is right near the entrance and he will set off at a gallop as soon as he sees it. For some reason he has decided that all sandpits require you to take your shoes and socks off. This isn't something Hublet and I insist on, and we were quite surprised the first time he started to take his shoes off. Maybe its something he learnt at nursery.
He spends ages in the sandpit sitting in the cabs of the wooden lorries playing with the steering wheels. Fortunately there are enough vehicles that you don't get many squabbles with other children wanting a go. The same can't be said for the buckets and spades - he was seriously unimpressed that Bubble was using "his" bucket.
Next to the giant sandpit is an even bigger playground with swings and climbing equipment for all ages. The climbing stuff is great for gross motor skills. 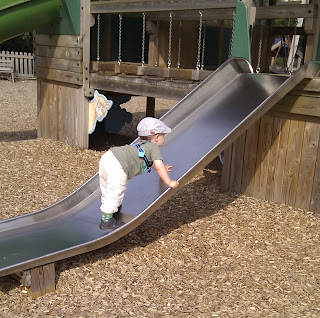 It even brought out Squeak's adventurous side this week as he scaled the slide backwards. Unfortunately his adventurous side didn't make up for his lack of balance and he smacked down quite spectacularly trying to scale the balance beam. 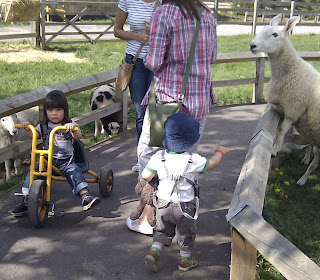 Of course they don't call it a farm for nothing. They have sheep, lamas, goats, donkeys, chickens, pigs and cows. There is a pet barn with rabbits and guineapigs and they get them out so you can hold them. Goblin has guineapigs of his own at home so he wasn't particularly interested in holding them, but he did love the aviary that runs the outside length of the pet barn and houses baby quail, finches and other birds I didn't recognise. 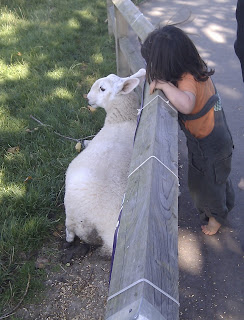 Last time we were at Marsh Farm he discovered that sheep have really springy fleece. He thought this was hilarious. He spent ages patting their fleece and laughing. The sheep were very accommodating. On this visit it was the goats that held his fascination. Bubble and Squeak sat politely eating their picnic lunch, but Goblin stuffed a couple of sausages in his mouth and legged it. 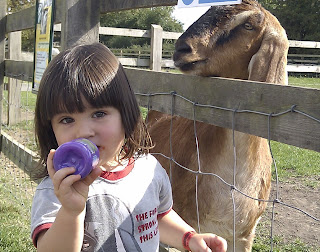 I found him stroking the goats (they have antibacterial gel and hand washing stations all over the place so touching the animals isn't a problem). Its just as well I decided to go an check on him because about two seconds after I took the photo on the right the goat decided Goblin's hair looked delicious and started eating it. Goblin was a bit upset because the goat must have tugged it quite hard. But he never cries for very long and before I knew it he'd taken off again. Bubble and Squeak took Goblin's cue and headed off too. The farm leave toy tractors and bikes lying around the place. Goblin found one and requisitioned it for the rest of the day.

As you know Goblin is obsessed with vehicles. The farm do tractor rides, but during the week they only do a couple around lunch time. We missed them because the boys were playing, but Goblin didn't mind. He just likes to stare at the tractors. The one time we did go for a ride I think he was distinctly unimpressed because he couldn't see the tractor from the trailer at the back.
I didn't take the buggy to the farm. We were there for four hours and Goblin walked/ran the whole time. There is so much to see we didn't even go to the two soft play areas or the craft room. The greatest thing about Marsh Farm is how well Goblin sleeps when we got home. 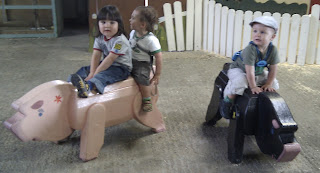