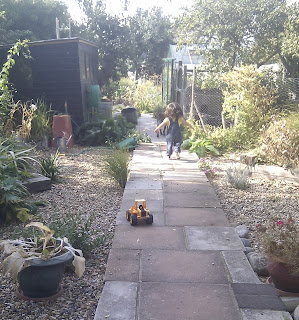 This weekend Goblin went to Nanny's house. Goblin always likes visiting Nanny. Not only does he get lots of cuddles, but she has the most fantastic garden. It goes on forever and ever and has brilliant places to hide as well as lots of things to do. 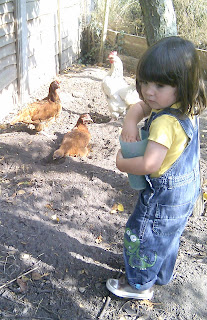 Goblin got to feed the chickens. "Chicken" is one of his new words this fortnight.
He played with the dog - well Ok he chased her until she took refuge in the vegetable patch. He really loves Nanny's dog, and we are lucky that she is a very calm and patient dog and will usually allow Goblin to drag her around. We do try and ensure that she has somewhere to escape to if Goblin gets a bit too much. 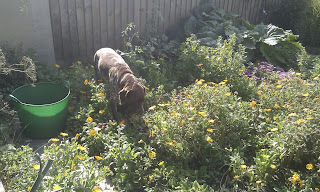 Goblin has a wheel barrow and some plastic garden tools at Nanny's house. He loves raking the gravel and moving the big stones around in his wheel barrow. But today he was using his diggers instead. 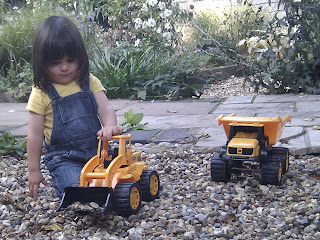 And he made a den in the wood shed - yes they have a wood shed, every small boys dream! But I had to coax him out after he showed a bit too much interest in the ladder. He is quite good at climbing ladders but this one wasn't attached to anything. 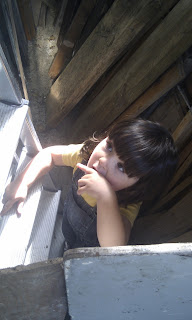 I distracted him with a mini percussion session using an upturned bucket and the garden sieve which was hanging on the side of the shed. He soon came and joined me, and brought his own drum stick. 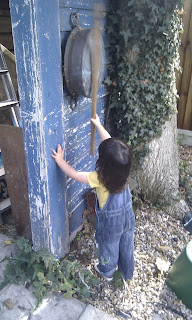 Then Goblin and I went on a nature hunt. We started off looking for snails. He'd seen a picture of one earlier and its another new word of the fortnight so I wanted to reinforce it by showing him some. But Nanny's garden appears to be snail free. We looked under pots and near the two tub ponds, and under big leaved plants. Nada, nothing, no snails to be found! But we did find three ladybirds and a couple of woodlice. Goblin liked the ladybirds. I got one to walk onto a stick so he could have a really close look. 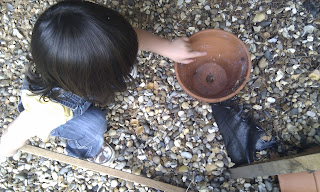 The one thing Nanny's garden did have a lot of was spiders. This pot which we turned over contained four. "Spider" is another new word this fortnight (you may have guessed that Goblin has been on a bit of a word binge the last two weeks). So we walked all round the garden finding spiders and spider webs. We found an enormous one in the boat bench. 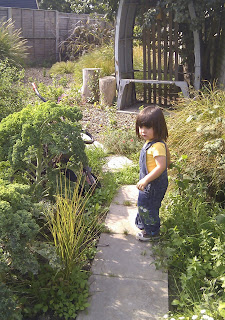 The web spanned the whole boat and the spider was right in the middle of the web so we got a great view. 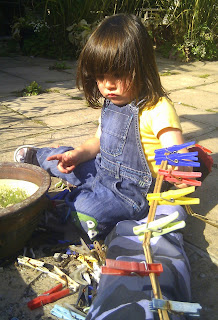 While looking for spiders Goblin found a pot of clothes pegs. I tried to show him the different colours of pegs but he wasn't interested. He did like trying to peg them onto a stick. I had to spend quite a lot of time showing him how the pegs work. Pegs are a great toy for toddlers because they encourage a pincer grip which is needed for holding a pen or pencil when writing. So I was really pleased that Goblin initiated this game. 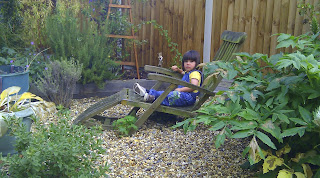 And after a long day of play Goblin needed a rest, and what better place than Nanny's wooden sun lounger.