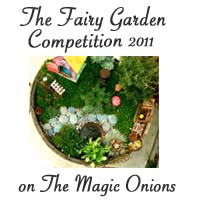 (Goblin is 23 months)
I was really excited when I found the blog The Magic Onions. I am interested in Steiner-Waldorf philosophies of education and this blog has some really great articles. But whats more it has the cutest crafts and this fab competition. However being my usual disorganised self (and because Goblin has been ill) I didn't get round to actually entering - Doh! 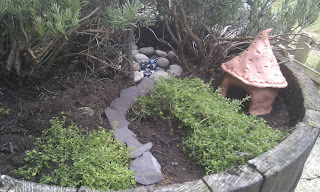 But I did make a fairy garden with Goblin and here it is. 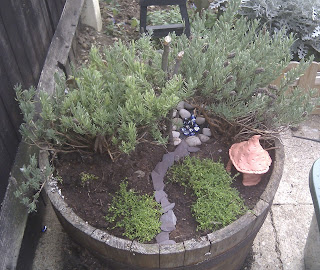 As you can see its still a work in progress. I had a barrel that I had planted lavender in last winter. A couple of the plants have died so there was a space which was just perfect for a little garden. I wanted to let it mature into a really lovely garden so I have left room for the plants to spread. I also didn't want to use too much "fairy furniture" because Goblin is still quite keen on a) putting things in his mouth and b) destroying things. But if you want to see some really cute fairy furniture go and check out the people who were organised enough to enter the competition. All the photos are available at the link above. 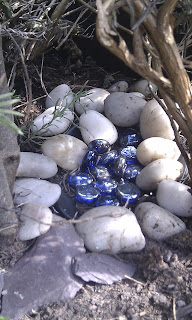 I did make a little pool nestled in the lavender forest. I am keeping my eye out for a nice deep finger bowl in charity shops but for the moment I am using a black saucer so it doesn't hold much water. I used some blue flattened marbles that I happened to have. I think they make nice sparkles. 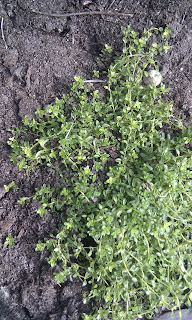 The "grass" is a type of low spreading thyme. Goblin helped me plant it with his little trowel - he liked digging the hole. The thyme smells lovely. Mixed with the lavender it makes the whole fairy garden a really smelly sensory affair. 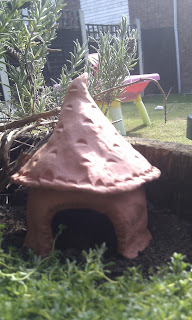 I made a little fairy hut using air dry clay. This one took half a packet. You can wrap the rest in clingfilm and pop it in a bag and it will keep for ages. You would think I would realise that air dry means what it says - but no. As you can see the hut is made from a pinch pot on the bottom and a cone shape on the top. If I had been sensible I would have made them separately and let them dry then stuck them together with glue. But instead I stuck the roof on while it was all wet and then left it to dry. Needless to say within seconds of Goblin discovering the garden he tried to pick up the hut and the roof came off exposing still wet clay. And this stuff is dyed to look like terracota so it stains clothes, hands and toddlers! Lesson learned.
My pièce de résistance' was going to be some cork screw grass. It is supposed to look like this - which I thought would add whimsey. 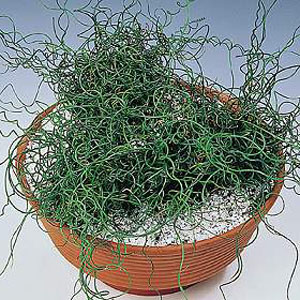 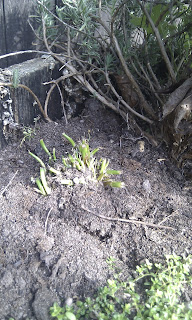 After my trip to the garden centre and I popped it down in the garden in its pot while I took Goblin upstairs for his nap. When I came back down my 5 free range guineapigs had feasted upon it and razed it to the ground. I'm hoping as it is a grass it will regrow with a bit of TLC.
Goblin doesn't seem too upset by the lack of corkscrew grass. He has decided that while the fairies are away during the day the garden is an excellent playground for his schleich animals. 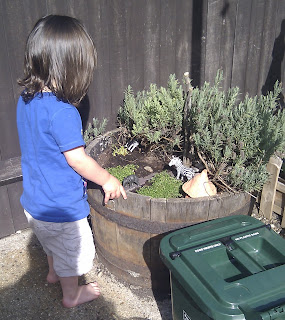