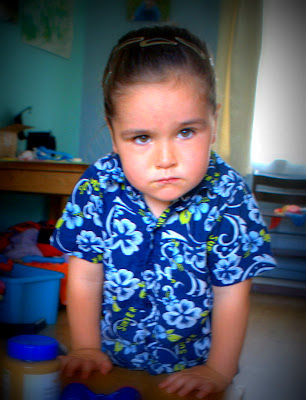 (Goblin is 33 months)
Goblin is being very testy at the moment. Prior to a few weeks ago the sum total of his tantrums would be lying silently on the floor for a while. I could totally live with that. I'd just sit down next to him and wait it out a bit and then offer him a cuddle and redirect his attention.
As he is nearly three I naively assumed we had missed the extremes of the "terrible twos" (Incidentally I hate that term anyway - labelling an entire year of a child's life as terrible). But unfortunately my smugness at having a reasonably untantrummy child has been put to rest. It was not that my child was more placid, it was simply that he had not yet reached that developmental milestone - Yes folks, when you are despairing that your child is flailing on the floor in the play area while those around him are playing delightfully, you can console yourself that it is probably just that your child has hit that particular milestone before them (not that parenting is a competition right!).
So in the last few weeks Goblin has developed the art of going from 'lovable, cute, beautiful, funny boy' to 'savage ball of fury' in less than ten seconds. And his new outbursts appear to be triggered by pretty much everything that is an interaction between parent and child.
"Goblin would you like a yogurt?"
*Screaming outrage, hitting, biting, lots of no no no*.
"Goblin what is the matter"
"no mummy no"
*pushing me away while simultaneously trying to gouge out my eyes*.
If I manage to keep my cool, which is getting increasingly difficult, I might attempt
"or there is toast".
And suddenly a bright beaming smile appears and there is my lovely little man again.
I am left sitting there thinking what the hell was that and what else might I accidentally say today that will trigger a 'rabid tasmanian devil' type response.
Some of you may know that we are trying to practice positive parenting, using redirection, guidance, talking calmly etc. Well let me tell you I haven't been feeling very 'positive' these last few weeks. And I have lost my temper and yelled and screamed a fair amount. And what does that teach Goblin, that when you are frustrated you should yell and scream - good one Monko!
I found myself wondering whether positive parenting is just hippy crap that will lead to a feral child who doesn't respect us. I'm guessing it doesn't matter what discipline method you use, when things start going wrong and your methods don't seem so effective, for what ever reason, you will always question what methods you have chosen. So in the last few weeks I have been seriously considering trying "the naughty step", something we had previously ruled out as not for us. Aha Parenting has a good explanation of why I find it a troubling discipline method.
Its difficult to stick to your (un-tried and tested) guns when all around you are touting an alternative, supposedly tried and tested method. The naughty step seems to be the magic solution to all parenting woahs. You talk to nearly anyone, especially those without kids, and they will say "what about the naughty step". But it really doesn't sit with the learning style of disciple we want for Goblin.
So for a while now I have been full of insecurity about whether we are using the right parenting and discipline methods. I guess some of my insecurity stems from the fact that Goblin is a bit of a hyper child. He can't really sit still and as such he is never going to win any awards for being "well behaved". Not because he isn't well behaved, but because most people who don't know a child judge a child as "well behaved" if they are unusually compliant and sedate. (broken in spirit?)
I can get that result by using valium on Goblin but nobody is telling me that is a good idea are they?

So I just keep reminding myself that parenting isn't just about the hear and now, its about helping to develop a child to be an impressive and happy adult.
When you think of the impressive adults you know, are the first qualities you get to their ability to sit quiet and still, to say please and thank you and to eat up all their greens?
If I keep that goal in mind maybe I can retain the conviction that we have chosen the right path for parenting our Goblin.

Ironically we won't find out until its too late anyway!

Posted by The Monko at 23:11
Email ThisBlogThis!Share to TwitterShare to FacebookShare to Pinterest
Labels: 33 months, parenting