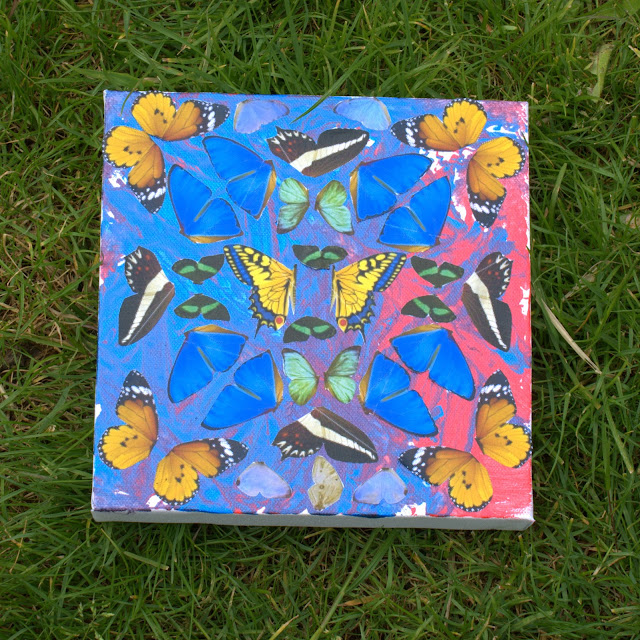 Inspired by the Kids Get Arty series over at Red Ted Art I decided to take Goblin to an art gallery. 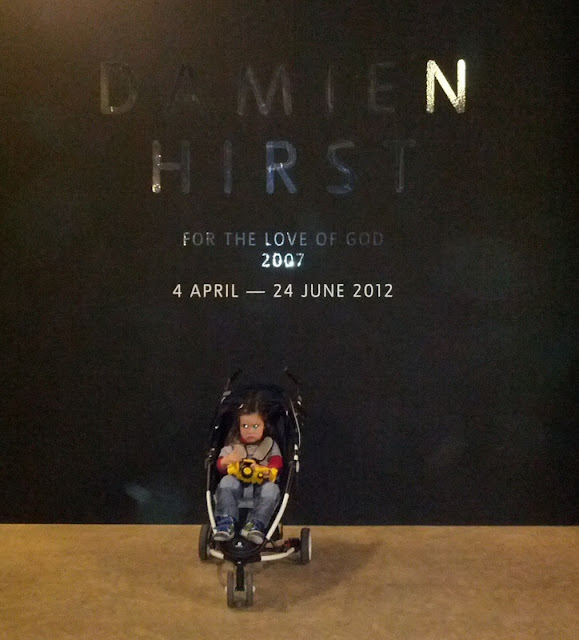 Damien Hirst was exhibiting at the Tate Modern so we took a trip to London to see his retrospective. I thought that Goblin would like the shark in formaldehyde (The Physical Impossibility of Death in the Mind of Someone Living), which he did. I hadn't given any consideration to the fact that Damien Hirst is a controversial artist because he produces works like "A Thousand Years" (1990) which is a rotting cows head in a big glass box being devoured by living flies. Had I thought about it, I probably wouldn't have wanted my toddler to see that particular piece. However Goblin was completely unfazed by it and wandered straight past to the big dead sheep in formaldehyde saying "look mummy, sheep". The Guardian has some pictures of the exhibition (the cow's head is number 8) 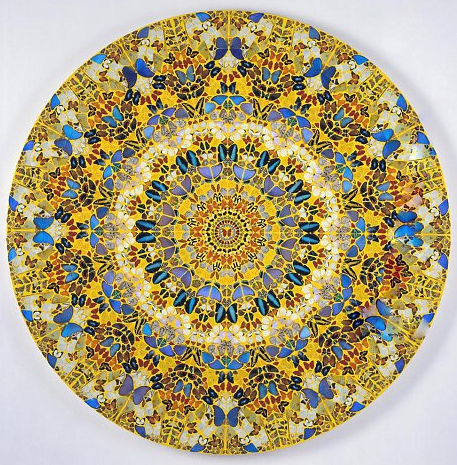 Goblin was very attracted to two items. The first was Black Sun which was a giant circular canvas covered in dead flies - There is no accounting for toddler taste! The second however was a beautiful butterfly canvas. I had seen pictures of the butterfly canvases, but I have to say they were so much more awesome in real life. They are huge, 12 feet high (I think) and they look like stained glass windows. Some are quite obviously butterfies but with others you have to get quite close before you realise that the colours are the wings of thousands of butterflies. You can see more pictures of the butterfly art here. 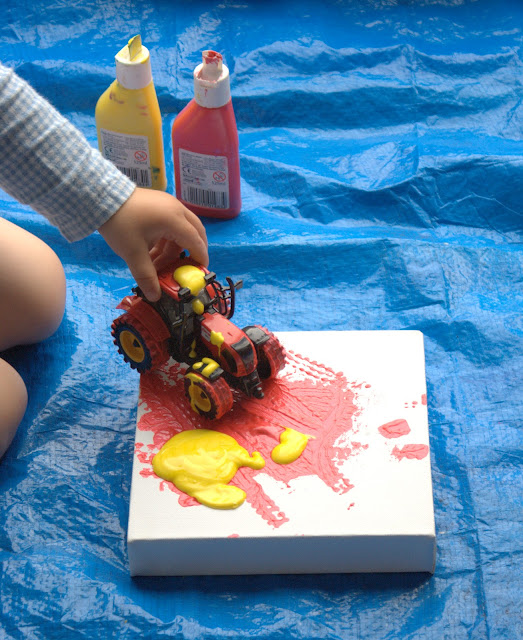 When we got home I decided to try and do some butterfly art with Goblin. I got him to paint three canvases. His implement of choice for any painting these days is always a vehicle. They make nice patterns with the tyres. I had some left over colour prints of butterflies from our butterfly play scape and my plan was to get Goblin to glue them to the dried canvases using a glue stick. However I was somewhat thwarted by the fact that the glue wouldn't stick to the paint, so we had to use liquid glue which is less easy. 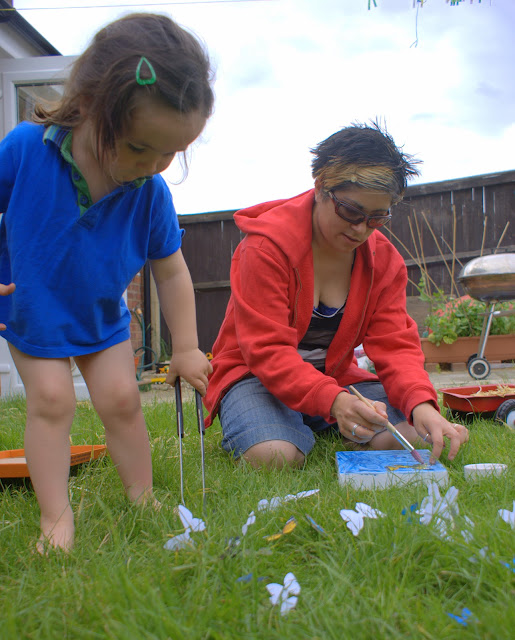 I set up in the garden and Goblin helped by picking up butterflies with his BBQ tongs! He wasn't interested in sticking them to the canvas which was probably just as well because they turned out to be a lot more fiddly than I had anticipated. 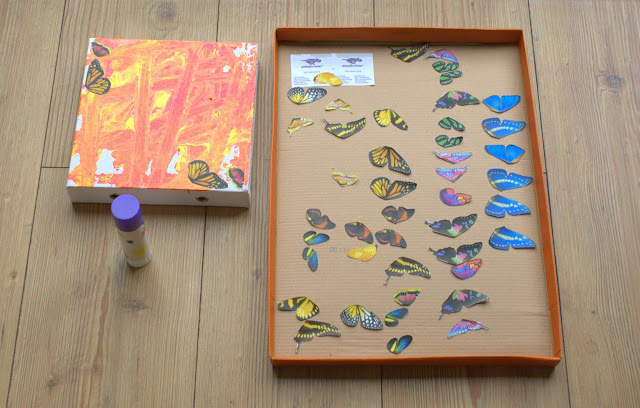 I have to say that my respect for Damien Hirst's work has gone up significantly since I tried this myself. I was using paper butterflies and still found it really hard to stick them. And my canvases were tiny. Hirst uses real butterfly wings which are incredibly delicate, his canvases are vast and his symmetry is impecable. I love how trying to replicate a work of art can help you appreciate it anew. 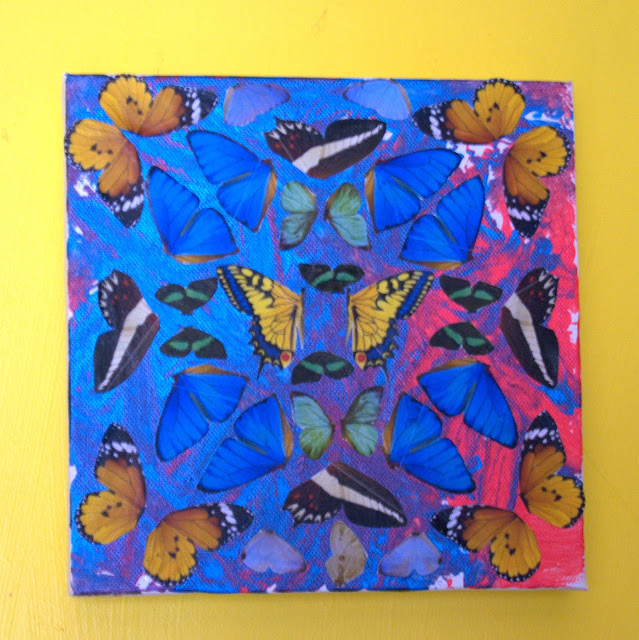 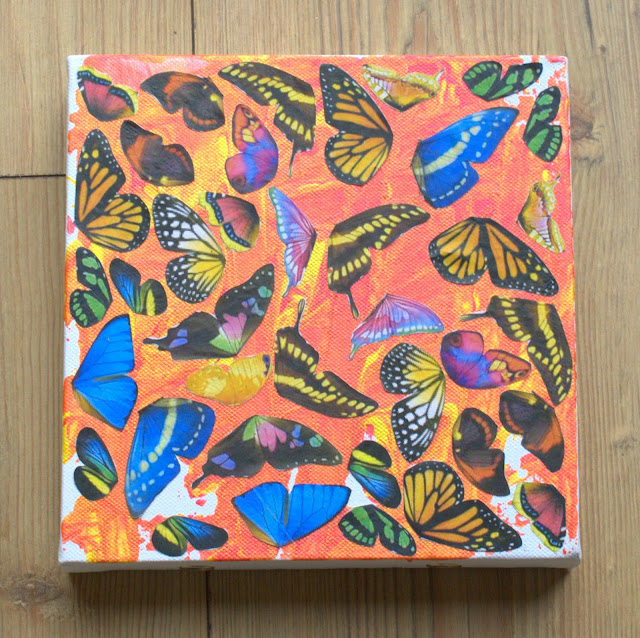 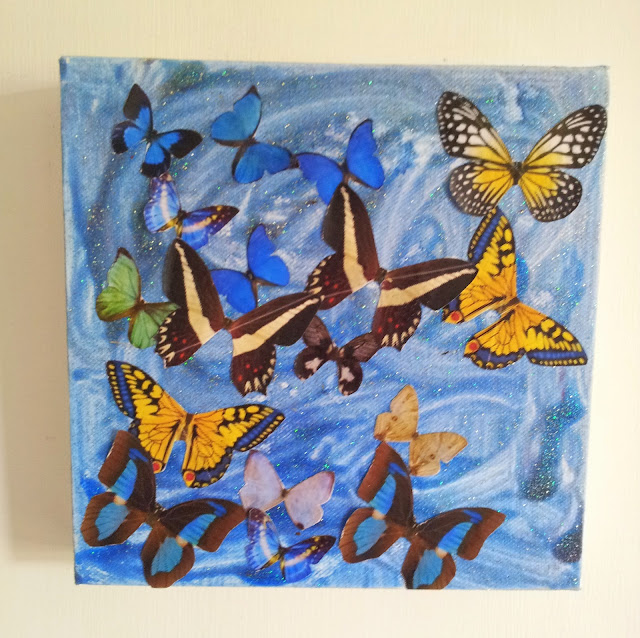 Here are the three attempts that Goblin and I made. My favourite is the top one which I think is truest to the Hirst style. Goblin liked the bottom one best. What do you think?

Posted by The Monko at 21:57
Email ThisBlogThis!Share to TwitterShare to FacebookShare to Pinterest
Labels: 32 months, Mummy's crafts, toddler craft and painting, tot school