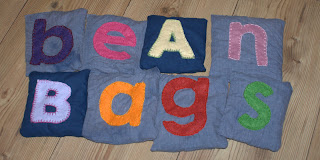 A while ago I made some upper case alphabet bean bags. Then my friend told me that in the UK kids are taught the lower case alphabet first. So I set about making some lower case ones too. They are very simple to make so anyone with any sewing skills probably doesn't need a tutorial, but I'm gonna do a little one anyway. 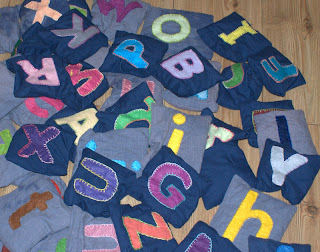 First find a font you like for your bean bags: Mine is Century Gothic for the Mac, size 400. To ensure that your letters will fit your felt you can measure a print out of the biggest letters M and W. I used 4inch felt squares from the Felt Fairy. Printed out an alphabet, pinned each letter to a felt square and cut them out. 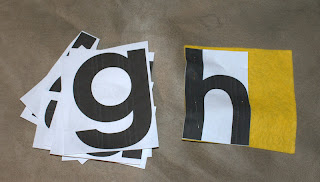 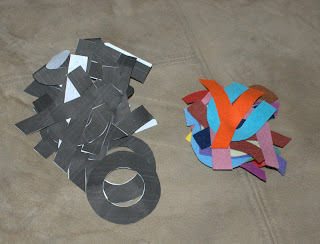 Cut out 26 strips of cotton, about 6 inches by 12 inches. Pin each letter to a cotton strip. The letter needs to be positioned closer to the middle of the folded strip because you will need a margin on the other three sides when sewing the edges. 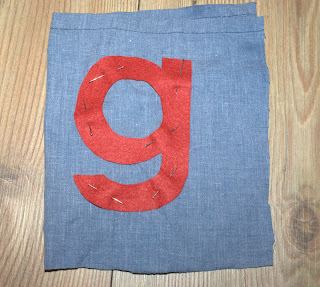 You will want to sort out the B, D, P and Q (if your q doesn't have a tail) so that they are all the right way round when pinned onto the cotton. 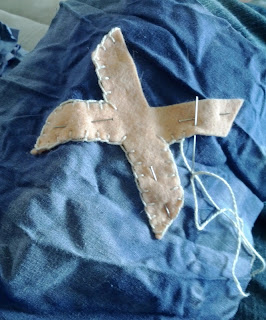 Use blanket stitch to sew the letters onto the cotton strips with embroidery thread. Machine sew the three edges of the cotton strip with the letter on the inside, leaving a two inch gap at the final edge. Then fold the letter to the outside and fill the bean bags with spilt peas or lentils (A jug with a spout is best for this - funnels tend to be too narrow). Finally hand sew the 2 inch hole up. 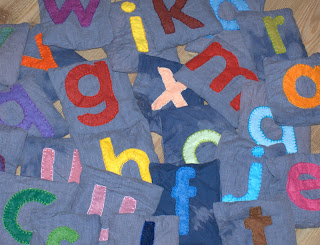 Beautiful beanbags, ready for upper and lower case matching games; hammering the right letter games, throwing your name games; and so much more.

Posted by The Monko at 21:05
Email ThisBlogThis!Share to TwitterShare to FacebookShare to Pinterest
Labels: letters, Mummy's crafts