(Goblin is 22 months)
Today I woke up with great plans. I was going to teach Goblin the colour green. I have been trying sporadically to teach him his colours since he was about 18 months. I think colour is a tricky concept because its quite abstract. Where as you can learn "this is a tractor", "this is a dog",  colour is much more complicated "this is a red tractor" but "this is a blue tractor" - Confusing huh!


Last month I bought a laminator and I made some colour matching cards. I started with random pictures but soon realised that Goblin is more interested if it includes vehicles. So I made a tractor colour matching card - can you spot what I did wrong? 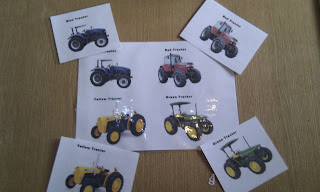 Yes that's right I used different tractors for each colour. There I was thinking my child was a genius because the first time I showed it to him he matched every tractor straight away. "Colours learned" I  thought - Stupid Monko. He didn't know the colours, he was matching the different shapes. Once I realised this I went back to the drawing board and made one tractor in several different colours. 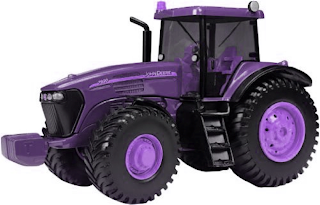 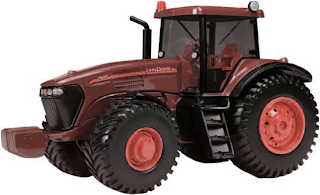 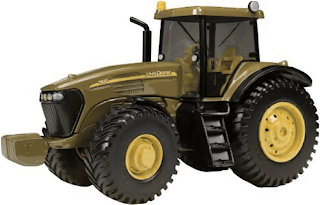 He found these much harder to match - which I find fascinating - I guess its because rather than having several visual cues he only has the one, colour. Anyway despite his tractor matching he still doesn't have a clue about colours. Hence my decision to go for it today.

So my plan was to start with some generic colour matching and then focus on the colour green by doing a colour hunt.
A while ago I bought some coloured clothes pegs in hobby craft. I had been wondering how best to use them. Last night I made some cardboard disks in the colours that matched the pegs. So my plan was to get Goblin to stick the pegs onto the right disks - colour matching and fine motor skills.

As you can see from the photo there is no Goblin to be seen. That is because he simply wasn't interested. He walked off about two seconds after I got this off the shelf. 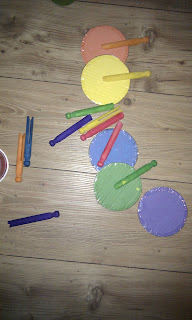 All he wanted to do was play with his stickers. But I had planned for this and moved onto my next activity. A colour hunt. To incorporate his love of stickers I gave him a sheet of green stickers. Then I excitedly ran round the room finding green things for him to stick the stickers on.  And I collected them in a green laundry basket.

Oh look - no Goblin. You guessed it, he wasn't interested. 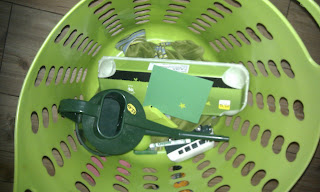 Probably a while before I got to this point, if Hublet had been home he would have told me to stop being a crazy woman. But with him at work it took me a while longer to realise I needed to throw in the towel. I finally remembered a useful Montessori principle - child led learning. A child will learn best if they choose the activity rather than you imposing it on them. So I stopped my ridiculous attempts to get him to learn the colour green. Instead we settled down to play stickers. All was not entirely lost as his sticker books have lorry's in all different colours so I was able to tell him the colour of each sticker he chose. 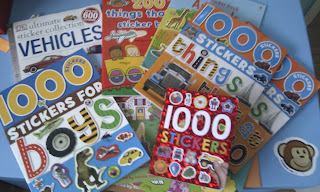 And after Goblin got bored with stickers - which takes a lot longer than me getting bored - we played with his fire engines. And I took the opportunity to show him which was biggest and which was smallest. Hopefully some of this stuff sinks in. 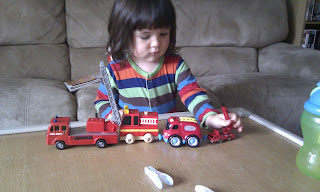 And for those of you who think I pack every minute with activities you will be glad to hear we also watched quite a bit of TV this morning. Goblin loves "Something Special". For those of you who don't know it, Something Special (on ceebeebies) is a programme for young kids and kids with special needs. It features Justin, and Mr Tumble (the same person dressed up as a clown). Justin goes on little adventures with his friends who are usually disabled children. Mr Tumble sends Justin a spotty bag with three pictures of special things for them to look out for. And Justin teaches us the sign language for the items. Goblin gets very excited when they do the magic to send the bag ("take your finger, touch your nose, blink three times and off it goes"). He touches his nose and then looks round to make sure I am doing it too - so I can't get away with checking facebook on my phone while he's watching this one. He has also started copying some of the signs. We did some baby signing when he was younger and this is a really lovely extension of that. We record the programme every day, so this morning we watch about three of them back to back. I don't feel too guilt because I sit with him and talk to him about what they are doing on the show. Maybe Mr Tumble can teach Goblin his colours!