(Goblin is 22 months)
Today we went to an Airshow. I took my camera, all ready to get some great snaps to post. But unfortunately due to the incredibly bad weather only three planes and a helicopter were able to fly - I'm not sure that even qualifies as an airshow. Goblin and I saw more planes than that at the light aircraft airport near my parents' house. 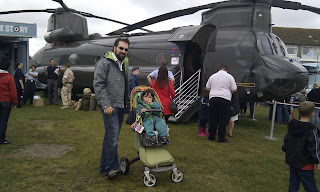 Incredibly we still had a great time. The Goblin was very excited about this Chinook helicopter. We were even able to go inside - although its pretty boring inside - just padding and cargo nets. We did see a Sea King Rescue Helicopter performing rescues. I think I may have been more impressed than Goblin. He was more excited about running up the steep bank by the sea wall and then hurtling back down (which was distracting as I kept having to make sure he wasn't about to hurtle straight off the wall, or worse straight into some poor stranger who would then be thrown off the sea wall). 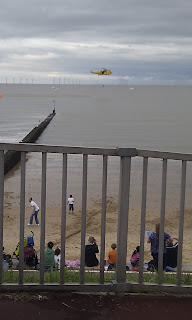 This is not a great photo of the helicopter, and doesn't really show that we actually had a good view, but it does show the very dark clouds which rapidly closed in and then drenched us.


So I thought instead of focusing on todays outing I'd write about some of our more successful outings. My main priorities when looking for somewhere to take the Goblin are
a) No busy roads near by, or a really sturdy fence;
b) lots of running space - nothing enclosed with breakables;
c) possibly something interesting to look at or do.


The Zoo
A firm favourite in our family is the zoo. Its enclosed, lots of space to run around and it has interesting animals. 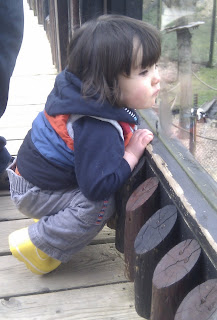 We can easily spend three hours there and not see everything. I love pointing out new animals to Goblin and reading the signs that tell you where they are from and what they eat. My current obsession is trying to explain to Goblin the difference between apes and monkeys. Although Hublet explained that that rule only works one way - no apes have tails, but there are some monkeys without tails - Damn that makes it tricky again, I hope I haven't been telling Goblin that some monkeys are apes.
It drives me nuts when I walk past a parent at the zoo and they are loudly telling their child that a gopher is a rat. Most zoos have signs clearly stating what each animal is. If your child is old enough you get them to read the sign, and if they aren't you can set a good example by showing them that you are reading the sign. Why do people just make up what the animal is, surely the point of going to a zoo is to see new and interesting animals and learn about them? Goblin was very brave last time we went to the zoo and he fed an elephant. 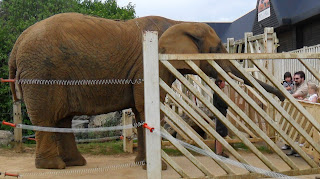 Local Parks
The local park is always a huge success. We are lucky that one of the parks in our area has no roads around it. I feel safe letting Goblin run wild. The other day he went there with his friends and he ventured quite far on his own. It was great to see his confidence growing so much. Not that he has ever been lacking in that area. 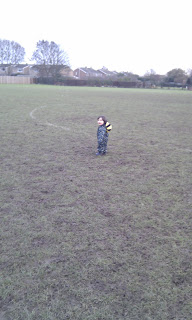 He loves climbing on all the equipment. He did dislike slides for a while after a few hair raising experiences shooting off the end of them, but he seems to have fallen back in love with them recently. 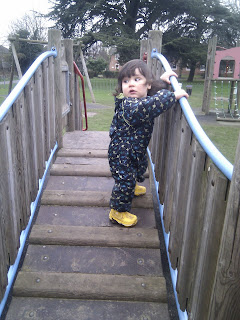 He also loves the swings. I play a game with him where I get him to try and grab me as he swings forward, then I act like he's hit me and I'm mortally wounded and I fall to the ground. He thinks its hilarious and will play it for ages. I read about this game in a book. The author - a psychologist and play therapist - said that toddlers need to be given opportunities to feel powerful, because they are always falling over and don't get many opportunities to take control. You can empower them through play and make believe. I really liked that idea and Goblin seems to as well. The book was called "Playful Parenting". As with a lot of parenting books I only read half of it, then it seemed to get a bit repetitive and I got bored. But it certainly had some good ideas in. Maybe one to borrow from the library. The author is Lawrence J Cohen. 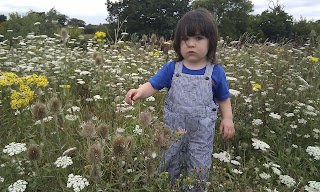 We are very lucky that quite near us we have an amazing country park with a play trail. The Goblin loves running wild in the open space and burning off energy. But he also likes the play equipment which is great for his gross motor skills. 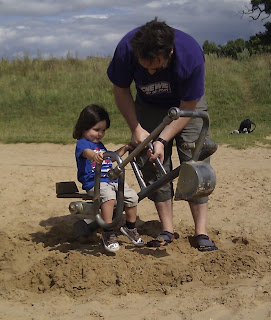 Goblin is quite good at the digger. Its complicated - you have to move one handle, pull it up and then move the other but he has mastered the sequence really well. Its just too heavy for him so he needs Hublet or me to help him pull. However the digger machine is always busy during the school holidays. One of the things I have realised is that if we do home school we will be able to go to the park when other kids are at school, and Goblin can play on the equipment to his hearts content. But for the time being it is good socialisation practice having to wait his turn and not try and get on at the same time as other kids. He is usually quite good at going and doing something else if the equipment is busy. I see other kids having a total melt down because they want to go on the equipment NOW, and I wonder whether we will be able to avoid that tantrum stage of whether it is just inevitable. 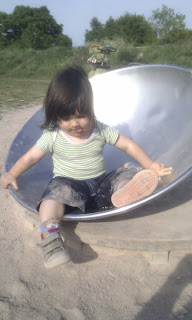 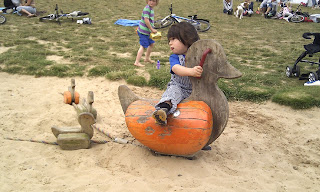 Long Walks
I love taking Goblin for long walks. There are a few wooded areas near us which are perfect for letting him scamper about without needing to keep track of him too much. 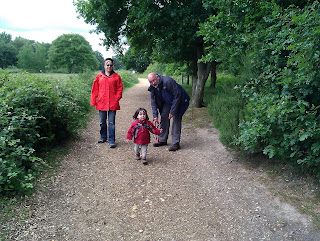 Until recently Goblin would flat out refuse to hold anyone's hand, so we invested in some reins. The traditional kind had quite a short strap and I wasn't keen so we bought a Littlelife backpack with reins

. He can carry his own drink and a spare nappy.  Quite often we'll unhook the lead and let him run but we can still use the bag handle to steer him in the right direction.


Although he's been walking since he turned one he is still not hugely reliable on how far he'll walk. The other day he made it all the way to town holding Hublet's hand, but on other days he will get as far as the main road and want to be carried. My back is not great so trying to carry a 2 stone plus toddler on my hip for any great distance isn't a good idea. Its also really hard to take a buggy and use the reins. So we invested in a backpack baby carrier. 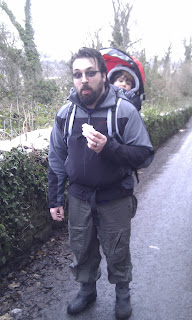 Despite my bad back I do find I can manage Goblin in the backpack for a few hours - although if Hublet is around I always let him do the honours. Goblin loves being in the backpack because its high up and he can see what's going on. Its great for long walks when you need your toddler to be safe. In the photo above we were in Wales - cliff walking with a toddler is not a great idea unless they can be contained.
When I want Goblin to do most of the walking the backpack is a bit cumbersome to lug around so I have also bought a cheap mei tai sling. 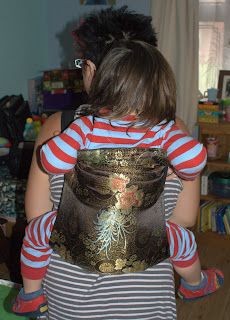 Here is the link to babyhawk who make the super deluxe original kind. Now maybe if you were going to have it from birth I'd say "sure spend that much money on one". But I only bought mine when Goblin turned 16 months so I opted for a cheap rip off from ebay. It does the job and I can fold it up and pop it in the changing bag. I find that it hurts my back if I cross the straps over my boobs, but if I tuck them under my arms and round the back under Goblin's bum the sling is much more comfortable. Here is a link to a tutorial on how to tie it as I described. She makes putting your baby in look quite tricky - I think its easier for me because Goblin is older so he does a lot of the work.
http://www.youtube.com/watch?v=zfck0-x7Z3E&feature=related


And anywhere with tractors
When Goblin's obsession was trains we went to see a place that had a working steam train. Now his obsession is tractors, and we have been fortunate in finding quite a few in random locations. 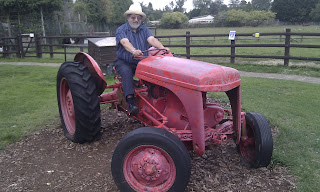 Sometimes we find more than one. Birdworld in Hampshire had several so I was able to please the the older generation too. My dad looks quite at home on this one. It just goes to show this is not an obsession the Goblin is going to grow out of any time soon.
And this one at the Gower heritage centre in Wales has been a favourite since Goblin was really tiny. 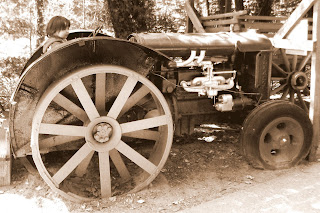